The Good: Keeps your desk tidier with a good-looking design & cable management feature.

The Bad: No included Thunderbolt cable or HDMI port, and the dock can’t charge tablets.

The Bottom Line: Despite the missing Thunderbolt cable, the Express Dock does a fantastic job of keeping your workspace neat & organised.

When you have devices like external hard drives, headphones and smartphone docks plugged in to your MacBook, the undocking process tends to be an utter nuisance, especially if you’re in a rush to grab’n’go.

That’s where the Thunderbolt Express Dock by Belkin comes in: a beautiful looking docking station that offers access to eight other connected devices via a single Thunderbolt connection.

It certainly looks the part, but I’m interested to find out whether it packs enough value to justify the £179.99 price tag that comes with it.

By keeping all of the ports on the rear, Belkin have been able to give the Thunderbolt Express dock a clean and understated design, making it fit right in to my Apple-orientated setup. All you see from the front is a subtle Belkin logo and the dock’s low profile & curved aluminium shell — no ports, no clutter.

Some may complain about the inconvenience of reaching to the back of the dock to unplug certain wires, but as someone who prefers my desk free of clutter, I’m glad Belkin opted for this design approach. Besides, my audio cables and hard drives stay on my desk, so there’s no need for me to have constant access to the ports anyway. 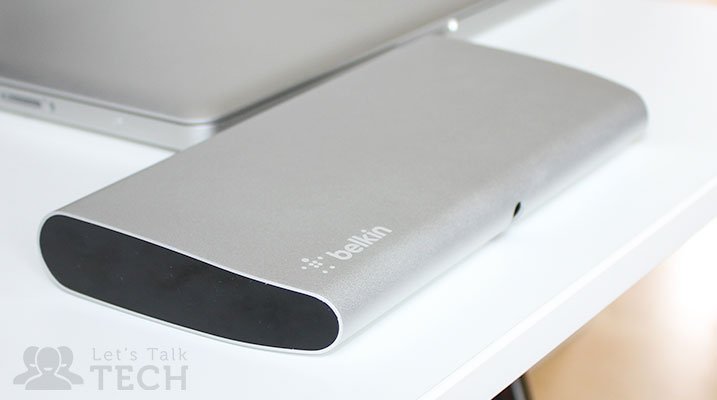 The Thunderbolt Express Dock has a simple & understated design

There’s a small opening at the front of the dock that looks like an odd design addition at first glance, however it turns out to be a cable management system that allows you to pass a wire from one of the rear ports to the front.

Cables are held in place by rubber strips on either side and in practical use I was able to fit two cables through, which is very convenient and useful. 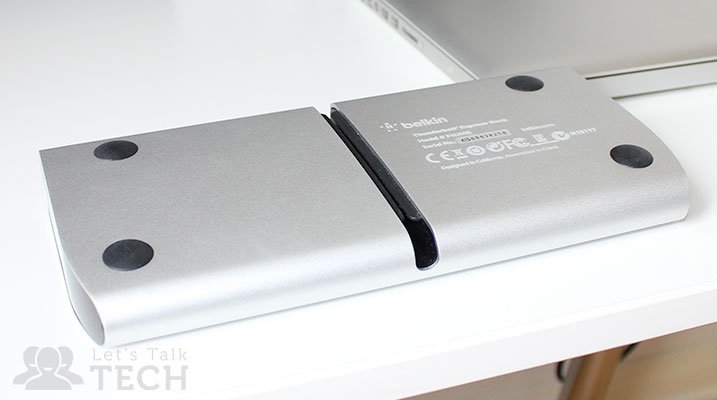 Sizing up at 33 x 236 x 119mm (H x W x D), the Express Dock’s low profile design helps to keep it out of the way and portable enough to carry around with a MacBook (image) if you needed the extra ports — just know that the chunky power brick required to power the dock makes taking it with you very inconvenient.

Realistically speaking though, this is more of a desktop product than something you’d carry around anyway.

The range of connectivity options on the Belkin Thunderbolt Express Dock

While hard drives and peripherals keyboards and docks will be covered by USB and Thunderbolt connectivity, there’s no HDMI input for displays — a significant omission by Belkin. You can use adapters like this one as a workaround, but by the time you have everything set up, you’ve used up both Thunderbolt ports on the dock which isn’t ideal.

Even when connecting to an Apple Thunderbolt Display or iMac, you’ll need to purchase a separate Thunderbolt cable which isn’t cheap at around £25 each. Ultimately, at this sort of price, I would have expected a cable to be included.

On a brighter note, you can daisy chain up to 5 Thunderbolt devices.

Very surprisingly, the Thunderbolt Express Dock can’t charge tablets like the iPad — whether or not they’re wired up with a Lightning cable or on a dock. iPhone and smaller devices won’t be an issue, but it’s a big let down that it can’t handle tablets.

When it came to using external storage devices, my USB 2.0 external hard drive got a little bump in performance by being plugged in to the Belkin Thunderbolt Express: 41 MB/s & 37 MB/s read & write speeds respectively, versus 20 MB/s & 23 MB/s when plugged in to the MacBook directly.

I won’t deny it, the missing HDMI port and inability to charge my iPad is annoying, but it would have been a lot more tolerable if Belkin had supplied a Thunderbolt cable with the dock.

Even with those few setbacks though, this is a great-looking dock that’s easy to set up, offers a range of connectivity options and is going to make your desk a whole lot tidier — plus, the cable management feature is bound to win over neat-freaks like me.