Brought to you from Warner Bros in collaboration with NetherRealm Studios (creators of Mortal Kombat), Injustice: Gods Among Us is the iOS adaptation of the console-based versions now available for PS3, XBOX and the Nintendo Wii U. It’s built upon an epic roster of DC heroes and villains and is a touch-based 3 on 3 combat game.

The Joker tricks Superman in to killing his wife and unborn child – detonating a nuclear bomb in Metropolis in the process. Now since this happens in a parallel universe, Superman goes off in a state of rage to kill The Joker.

Back in the ‘real’ DC universe though, the Justice League are dealing with their own version of The Joker and his nuclear terror plot, only to be transported to the alternate parallel universe where Superman has assumed a dictatorship role in a plan to fight against crime (as a result of his loss). Batman then rallies DC’s heroes from the ‘real’ universe to end the reign of Superman’s dictatorship.

It’s a little bit much to get your head around once with the parallel universes and all, so feel free to re-read that!

If you’re looking for a complex button configuration like with consoles, this game doesn’t have it. Many people have complained about the lack of controls & options available for Injustice: Gods Among Us, but as a regular iPad gamer I feel that less is more. Injustice keeps things simple with the following controls:

Attack: Tap screen repeatedly with a swipe gesture at the end for a heavier final hit

Special Attack: Any of the buttons at the bottom of the screen. These Power Bars fill as you build up attacks.

Block: Two fingers on the screen

I know, it’s pretty simplistic. It would be great to be able to jump in the air, run backwards and forwards just like on a console – but at what expense? With a console controller, you have physical buttons. When holding a screen you won’t have that sense of accuracy and response without physical buttons to press so for me, keeping the controls minimal was a bold but positive move for Injustice: Gods Among Us – both for the sake of simplicity and ease of gameplay.

What I found to be the fun challenge was filling the Power Bars at the bottom of the screen in order to pull off a devastating move on the opponent. It offers something to work towards rather than aimlessly tapping away like a one-trick-pony, and since each player has their own “special move” it gives a greater sense of enjoyment even with the basic/minimalistic controls. Time it correctly, and you’ll be depleting your opponent’s life gauge in no time.

If you’re interested in eventually purchasing the console version of the game, an incentive to get started on the iOS version are the unlockable rewards available to transfer over to the console by linking a Warner Bros online account. It’s good to know that your efforts on one version aren’t independent of each other!

There aren’t may games that make the most of the latest iPad/iPhone’s Retina Display. Injustice: Gods Among Us does. The arenas and characters are crisp & detailed and there isn’t any lag when pulling off combos and fast moves. Also, when you crank up the brightness on your display you can truly appreciate these details which makes the gaming experience that much better. 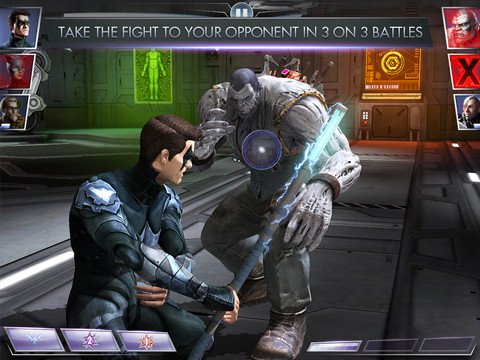 It’s definitely worth noting – this game does it’s best to milk your iOS device’s resources. You can easily expect to start the game on 100% battery life, only to find yourself with 80% or less by the time you kill off the game. On top of that, I found that playing Injustice on my iPad made it turn very hot, but having said that, it’s no different from other high quality games like Need For Speed.

–  Point to consider: Make sure you kill off the app once you’re finished. Leaving it on will continue to drain your battery life and make the device hot.

Although comic book aficionados will certainly debate the ability of Batman & Green Arrow to take hits from Superman and surviving – Injustice: Gods Among Us is most definitely a game worth trying for yourself if you enjoy fighting/combat games.

As an entry-level freebie to the main console version, the iOS counterpart is a clever marketing move to create buzz around the new release and create a following. After all, with the ability to transfer your rewards between the console and iOS game; it gives more of an incentive to get started straight away.

Even if you don’t play this as an entry point to the console version, it’s still a fun and pleasurable combat game that reminds you of the awesome capabilities of your iDevice – and that’s enough of a reason for me.

Click on the link to download Injustice: Gods Among Us for iOS. Once you’ve given it a try, be sure to share your opinions in the comments section below.