After getting the Jabra Revo Wireless headphones in for review here on Let’s Talk Tech recently, I was really impressed with how they looked & felt as if they were made to last. Combined with excellent audio quality to match, they were headphones worthy of their £170 price tag.

You see, that cost factor was just about the only main criticism I could draw from the Revo Wireless – well, aside from the cheap carrying pouch Jabra provide anyway.

Particularly because of that, I was keen to check out the Revo Wireless’ corded and slightly more affordable £140 alternative – the Jabra Revo. Since it isn’t the biggest of price differences, I was interested to see which would be better value for money.

One of the things that impressed me most about both Revo headphones is their build quality. Unlike a lot of headphones I’ve come across, even at the premium end of the market, these feel solid and give the assurance that they can withstand almost anything. Since they’re made with an aluminium frame, a shatterproof headband and steel hinges – it’s not really a surprise. 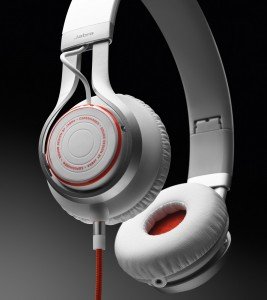 It isn’t all about a rugged build though, the flexible headband grips well to your head without feeling overwhelming and the memory foam ear pads feel comfortable even over long periods of use.

The headphones also conveniently fold up to make them portable and come accompanied with a carrying pouch which, unfortunately, feels really cheap and below the quality I expected from Jabra – especially at this price range.

In the design department, the Revo headphones aren’t as colourful or bold as the likes of SMS Audio, Skullcandy or Beats, but you can still choose between white, grey or black – all of which come with coloured accents on the ‘turntable’ ear cups and audio cable.

Although they share the same looks, the Revo doesn’t have the same turntable functionality for audio controls as the Revo Wireless, which is a shame. I thought it was one of the standout features of the Revo Wireless because of the suave way it worked and felt – with a finger spinning gesture on the ear cup to adjust volume, and a couple of taps to forward or go back on a track.

Instead, it’s the Revo’s audio cable that you’ll need to use for controlling music and phone calls. That cable happens to be very nicely covered in a strong fabric material that helps to prevent that annoying cable tangling when you’re packing them away.

With your Jabra headphones, you also get access to a dedicated app called ‘Jabra Sound’. With it, you’re able to manipulate the equaliser settings and use the full capabilities of the Dolby Digital Plus feature which is meant to enhance sound quality.

Out of personal preference, I opted to use my default music apps particularly because I stream my music rather than storing it on my devices – and unfortunately this app doesn’t cater to that.

Also, whilst the Dolby setting makes a significant and worthwhile improvement to the bass,  I wasn’t a fan of how it reproduced the vocals, making them sound slightly ‘echoed’.

Since they share the same speakers, there were no surprises in performance from Revo’s 40mm drivers – they sounded impeccable across all musical genres, no matter what volume I played them at.

The bass output was powerful without overpowering the vocals and just like the Revo Wireless, they’re very good at cancelling out external noise without actually having noise-cancellation technology.

There really isn’t much to separate these two headphones aside from the compromise on turntable controls and wireless connectivity. As with most tech products, you’re going to have to judge for yourself whether the added features have enough value to you to justify paying the extra cash.

If it’s within budget, I’d recommend the Revo Wireless simply because the additional features are worth the higher cost.

If on the other hand you’re on a strict budget, you can still confidently go ahead with the corded Revo headphones, safe in the knowledge that you’re investing in Jabra’s impressive build quality and top notch performance.