Keeping fit undoubtedly feels good, but it can also be a hard, boring chore. The tedium can be broken up by music, of course, but earwear is problematic when you’re jogging — standard ‘phones don’t like the weather and tend to fall out, while sports earbuds often rank poorly for sound and comfort. The Jabra Sport wireless headset is designed specifically for active types, but does it avoid these pitfalls?

As you will probably have guessed, the Sport is designed to cling to your ears, and thereby avoid coming off during action-packed pursuits. I often find this kind of product is far too one size fits all, but the Sport comes with a generous range of variously sized and shaped earbuds for a snug fit.

The headset clings on to your ear for a snug fit

Nothing about the Jabra’s plastic exterior is luxurious or premium, but it’s instantly obvious that this is an audio product made for outdoor use. Jabra claims that the Sport is weather- and dust-proof, and a close inspection suggests that there is very little opportunity for dirt or moisture to get in.

The left and right sides are connected together by a flat wire (not totally wireless, then), which can be tightened to prevent flapping, and while some folks will find the bright yellow trim distasteful, I quite like the splash of colour.

Any Bluetooth device without a screen can be tricky to set up, but pairing the Jabra is a relatively painless experience.

Holding down the multifunctional Play/Pause button for two seconds switches on the Jabra — an action that is confirmed audibly through the ‘phones — and then you just need to select the headset on your source device. Once connected, the Jabra has an impressively long range, stretching into another room during my testing. 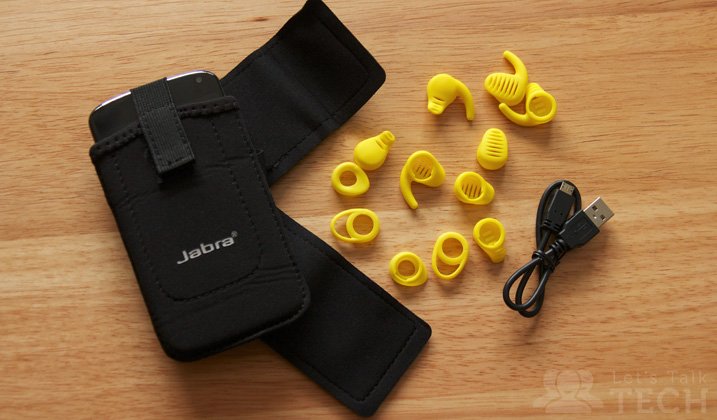 All of the additional accessories Jabra provide including an armband, several earbuds and a micro-USB cable

The Jabra charges via micro-USB in about two hours, and will happily keep going for several hours of continuous sound. The supplied cable is very short, but at least there is one included.

A note of caution: if you’re an audiophile, the Sport is probably not for you. I’m not saying it sounds bad at all — it’s better than Apple’s supplied earphones, for instance — but it doesn’t light up your ears with outstandingly rich quality. Given that it retails for £79.99 and is a sport-specialist, though, this is probably to be expected.

Included with the Sport is an armband, which is well sized for the average smartphone. Unfortunately, trying to put it on without the aid of a friend is futile. With some fitting assistance, it holds on well and is pretty comfortable, but the top is open to the elements, which seems a bit daft considering the outdoor focus. 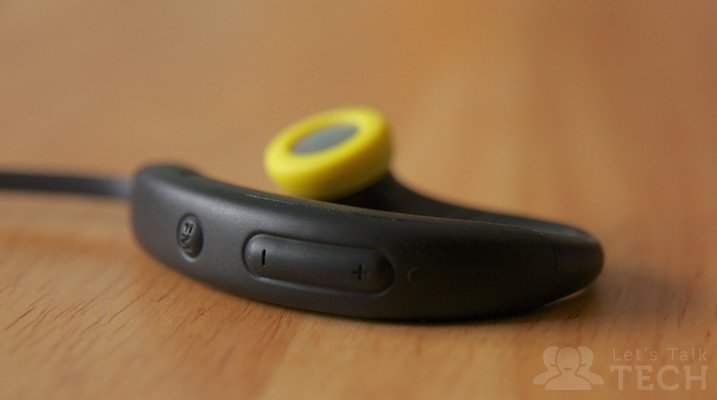 Embedded controls on the headset

The Jabra’s listening controls are, however, very good. You can play and pause your music via a button on the right earpiece, and volume can be controlled from here, too. There’s also an in-built FM radio, which holds its signal remarkably well, given how tiny the internal aerial must be. Tuning is achieved by holding either of the volume buttons for a second, and it’s a system that works very efficiently.

As you would hope, the Sport works as a hands-free headset, and it performs quite well in this regard.

The Play/Pause button is in the action again, allowing you to answer calls from the earpiece, and despite the microphone actually facing away from your mouth, it picks up your voice (rather than the ambient hubbub) as well as most phone mics.

Again, the sound quality of the other person’s voice isn’t remarkable, but it’s good enough for the recipient to have a clear understanding of what you’re saying, even as the wind rushes by.

We’re spoilt by a lot of the products we review on Let’s Talk Tech. Many of them are blessed with outstanding technical quality, or stunning looks, or both. The Jabra Sport doesn’t fall into any of these categories, but what it does have in its favour is solid build quality, sensible button-based operation, a snug fit and respectable hands-free calling, not to mention the low price tag.

Whether that’s enough somewhat depends on your budget and how regularly you’re going to want an audio accompaniment to your sport. There are certainly better options than the Jabra in terms of sound quality and exterior finish, but if you’re only a part-time fitness freak, you will probably be happy with the upgrade provided by the Sport.

No award winner, then, but a good-value listening option for sport enthusiasts.