As someone who spends a lot of time working at a desk, I take a lot of pride in maintaining a neat and efficient setup.

So, while having my iPhone or iPad Mini lying around isn’t the biggest deal in the world, I’d much rather have them docked with a nice viewing angle and a power outlet to keep their hungry batteries topped up. 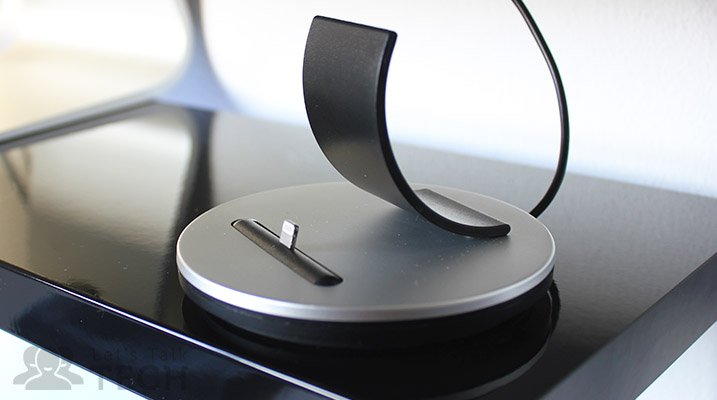 It’s fair to say that most (if not all) of the AluBolt’s design flair is owed to the curved support bar, and combined with that familiar aluminium finish, the dock looks right at home alongside my Thunderbolt Display & MacBook Pro setup.

The curved bar offers plenty of stability when an iPhone or iPad Mini is resting on it, however it doesn’t feel quite as strong as I would have liked. Push down on the top of the bar or pull at it lightly and it feels frail, as if it’s going to detach from the AluBolt’s base with any serious pressure. It’s unlikely that anybody will tug away at the support bar for fun, but I’d still expect something sturdier at this price. 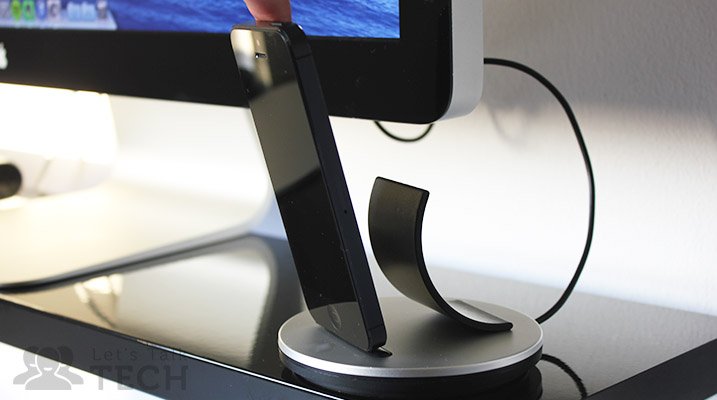 Just Mobile incorporated a very nice feature I haven’t seen on a dock before; a pivoting Lightning connector.

The benefit is that it prevents damage to your Lightning connector and the iPhone/iPad’s port when you need to undock it quickly. Since the connector tilts towards you when you need to pull out your device, you won’t be causing any damage by yanking it out from an awkward angle.

Unfortunately, the bad news is that the AluBolt isn’t very compatible with cases. I tested out the Spigen Slim Armor case for iPhone 5 and because of it’s thickness, the Lightning connector couldn’t reach the iPhone’s port. This won’t be so much of a problem for iPhones with open-bottom shell cases, but the incompatibility with larger/thicker cases may be a problem for some.

Also, despite the pivoting connector the AluBolt only allows for a single, upright position; a common (but annoying) trait of iPhone docks I’ve used. The viewing angle is good enough for any desk setup, but I found that it worked best for me up on the monitor stand, a little nearer to eye-level. 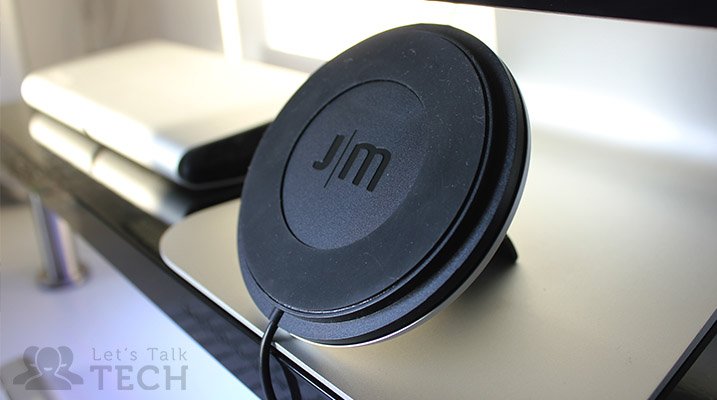 Rubber base helps to keep the dock in place

The AluBolt’s base has a simple rubbery texture that helps to keep it stable when you’re tapping away at the screen. However, since it’s so lightweight (157.5g), I found that any gentle nudge or movement to the base of the AluBolt would cause it to move.

As much as I love the AluBolt’s style, its build quality has room for improvement, especially considering its £45 price point. A heavier base would help to keep it grounded and prevent those unwanted, accidental nudges that move it out of position. And while the curved bar looks fantastic and comfortably supports an iPhone/iPad Mini, it doesn’t feel quite as sturdy as I would like either.

That said, neither of those points are necessarily ‘deal breakers’, and for someone who takes pleasure in making their workspace look good, Just Mobile’s AluBolt is sure to add a touch of style.