If you’re looking to ditch the iPad’s on screen keyboard in favour of a productivity-boosting alternative – I don’t blame you. It’s accessories like these that make tablets like the iPad such great workstation alternatives when you’re on the move.

Now there are plenty of folios out there but if you like to travel light, those cases tend to be bulky and don’t always pack the best keyboards either. So, if you fit in to the “light traveler” category, I’ll put my neck on the line right now and say Logitech’s Ultrathin Keyboard Cover will probably impress you as much as it impressed me. As far as a keyboard accessory for the iPad goes, there aren’t many that stand up to this one and here are my reasons why. 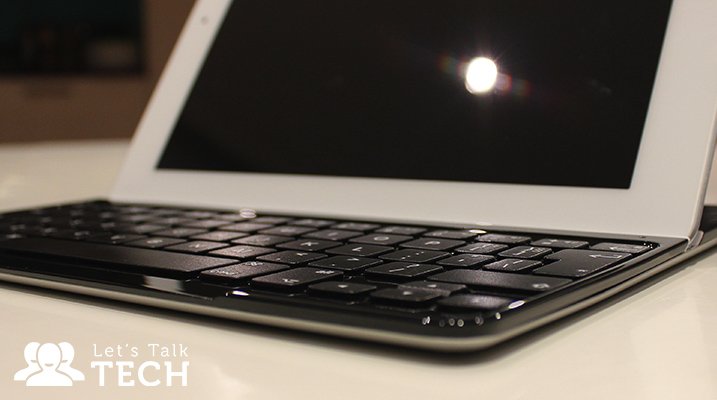 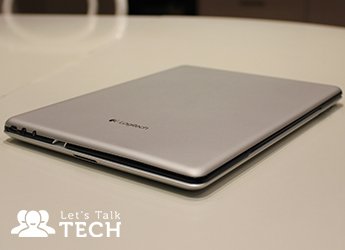 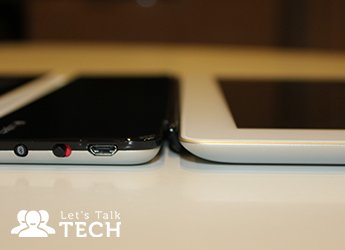 Logitech really weren’t kidding when they branded this keyboard. It’s impressively thin and lightweight and while it doesn’t boast a huge physical presence, it does do a great job of complementing the iPad’s design with only 8mm added in height.

Where a normal keyboard folio is likely to only handle landscape orientation, the Ultrathin Keyboard also lets you use your iPad in portrait mode. It isn’t the best for uneven or unstable surfaces since it doesn’t click itself completely into the groove (unlike in landscape mode), but it works well enough on a table or desk.

Straight out of the box you’ll quickly notice that the gloss finish is a fingerprint magnet, so it’ll need cleaning more often than you may like. Even so, it does give the keyboard a nice looking finish. On the back, the Ultrathin Keyboard carries a consistent look to the iPad’s aluminium finish so when closed they look like a unified device.

On the sides you’ll find a magnetic clip that latches on to your iPad to help protect the screen, a very similar system to Smart Covers. Because of that similarity, you’ll need to bear in mind that the rest of your iPad will be exposed. I had considered a workaround by adding a shell-case for the back of the iPad, but it all became too bulky to carry and meant that the iPad couldn’t slot into its groove without removing the shell first.

The only worthwhile solution I could think of that would prevent accidents, was to purchase an additional protective sleeve where you can slip the keyboard and iPad when they’re not in use. It isn’t ideal, but if you want the best of both worlds it’s a compromise you may need to make to avoid damaging your iPad. 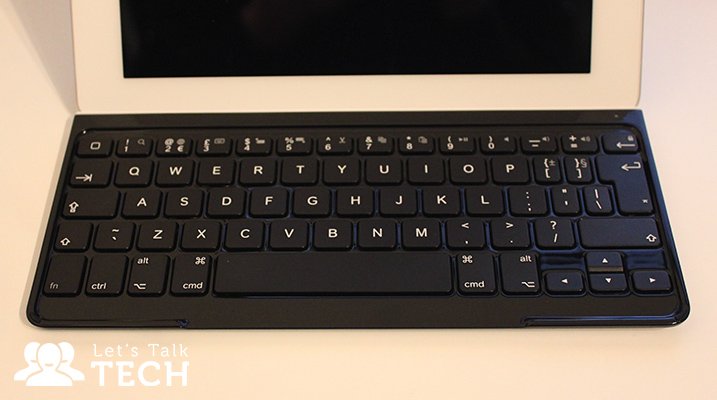 Taking into account how thin the keyboard is, the buttons feel surprisingly springy and firm. Of course the keys are far more condensed than on a traditional, full sized QWERTY keyboard – but using it was easy and my typing was still surprisingly accurate.

The added function keys were helpful in the absence of a mouse too, with shortcuts for volume adjustments, jumping to the home screen,  highlighting entire words and even bringing up the iPad’s spotlight feature to search your device.

From a usability point of view I must admit, I thought that after prolonged usage the condensed buttons on the keyboard would make the Ultrathin uncomfortable to use – but it wasn’t. The iPad/keyboard combination turned in to a temporary substitute for my MacBook Pro and because of the added benefit of portability – I even found myself getting more work done on my journeys to and from work.

As a stand-alone keyboard to match up with your iPad, the Logitech Ultrathin is an awesome performer, looks beautiful and adds very little weight or bulk to the device. In fact, that magnetic clip makes it feel nearly seamless with the iPad.

There is somewhere it falls short though – as a cover. The Ultrathin protects the screen, but that’s just about it. All other areas of the iPad are entirely exposed to the elements and one unlucky drop means even the screen runs a risk of smashing to pieces. Of course, it’s clear that this isn’t a folio so before investing in the Ultrathin Keyboard, you need to accept that it will be more exposed that usual and that it won’t actually protect your iPad all that well.

Having said that, if you’re willing to pull off a quick work-around and buy a protective sleeve for the iPad and Logitech Keyboard duo, then this is a perfect way to enjoy tablet portability with a full typing experience on the go too.