One of the most under-appreciated devices you can own is a battery pack. Think about it. When you’re reaching that dreaded red zone and you’re still nowhere near home, battery packs save your ass from walking around with a dead phone. To some of you, that means no way to navigate, message loved ones or even worse: no candy crush! 😱

With that in mind, I thought it would be helpful to round up a few high-capacity battery packs that could be worth your money. I’ve kept them between the 10,000mAH and 20,000mAh capacities since they’re able to charge your devices multiple times, and mostly under £60 to keep them accessible in price.

So, without any further ado, let’s jump straight into the roundup! 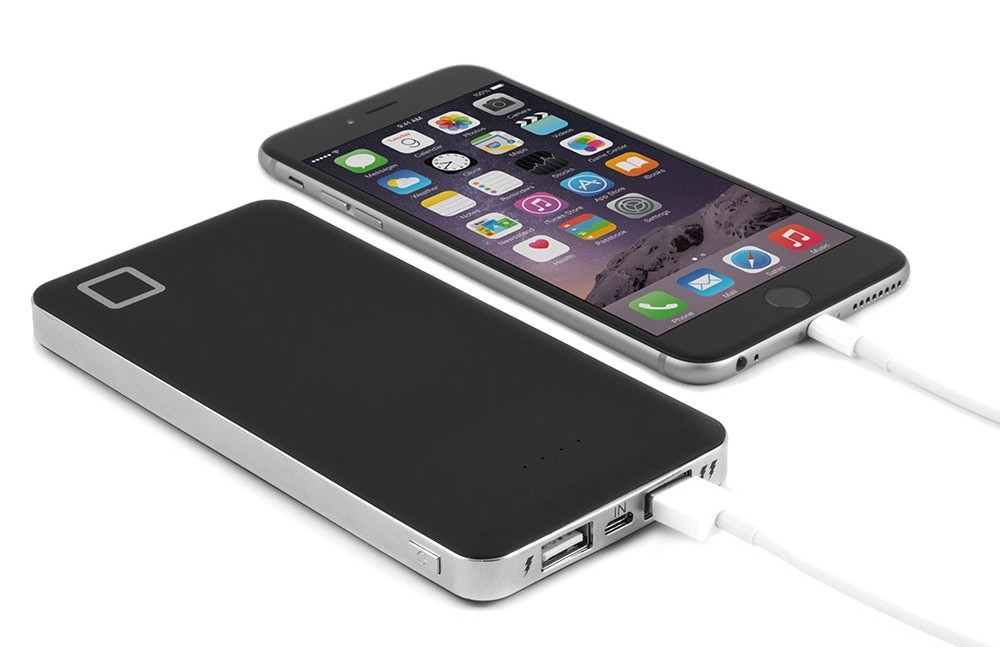 With a 12,000 mAh capacity, Proporta’s TurboCharger will comfortably keep your devices juiced up throughout the day, and then some. It’s rocking a simple look with a black soft-touch plastic body, and although the silver trim around it feels a little tacky, the whole thing looks quite nice.

You’re getting one 1A port for smartphone charging and another 2.1A port for tablets and larger devices, although I would have liked to see two 2.1A ports on the TurboCharger to make it complete. The top of the unit has four LED lights to give you an indication of how much battery is left, which is something I always like to see on these things too. What I particularly like about the TurboCharger though is the included micro USB and Lightning cable. Most manufacturers don’t include a Lightning cable, so Proporta gets brownie points for that. 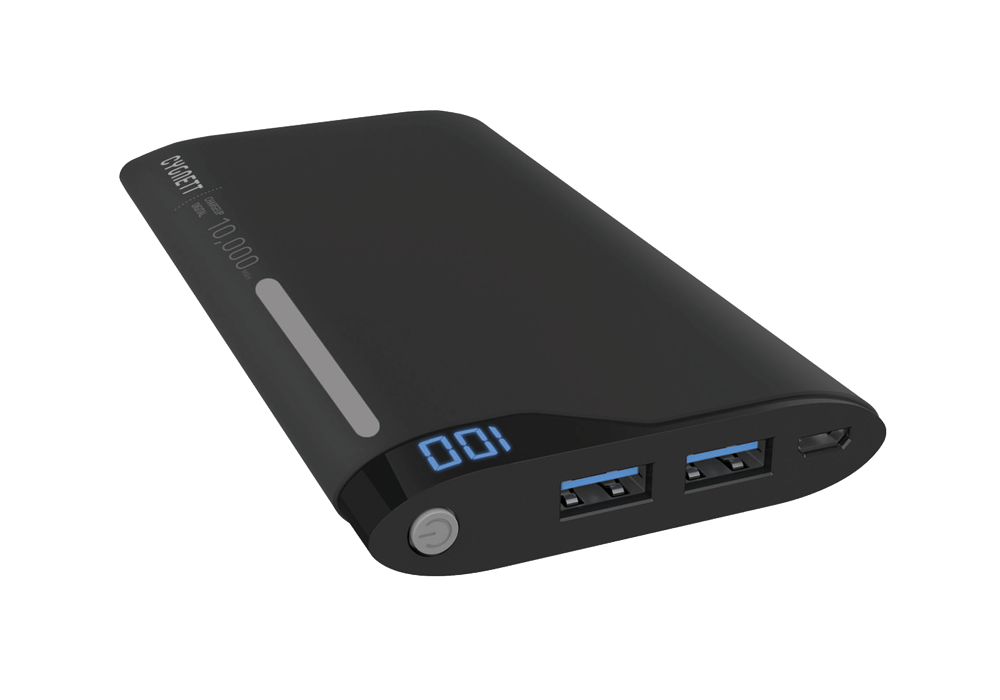 Selling at about £38 on Amazon, the Cygnett Chargeup Digital 10000 is a good looking and compact battery pack. Thanks to its soft-touch black plastic shell and pebble-like curves, the Chargeup actually feels really nice in the hand and is surprisingly lightweight.

Besides the two 2A ports that can charge two of your devices at the same time, what I really like about this unit is the digital display that tells you exactly how much juice it has left. Instead of a colour system or LED indicators, this battery pack simply gives you percentage to make things easier. 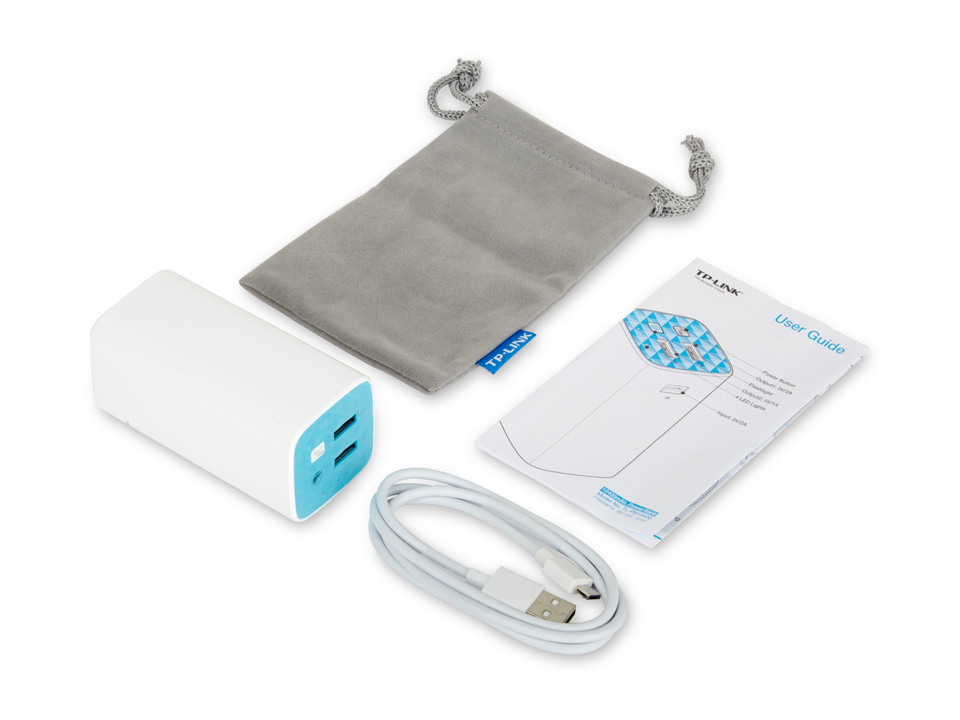 Despite its not-so-catchy name, TP-Link’s TL-PB10400 power bank is actually a really nice option if you’re looking for something more compact. It packs a 10,400mAh capacity into a compact white glossy plastic shell and tops off with a really cool looking textured surface near the ports.

There’s a 1A and 2.1A port here so you’ll be able to charge two devices at the same time, LED indicators to tell you how much charge is left and TP-Link even throw in a built-in torch for good measure. You also get an included micro USB cable and a very nice grey pouch to throw your power bank into. Taking into account its good looking & compact design, capacity and price point of £22, TP-Link’s TL-PB10400 is a solid choice. 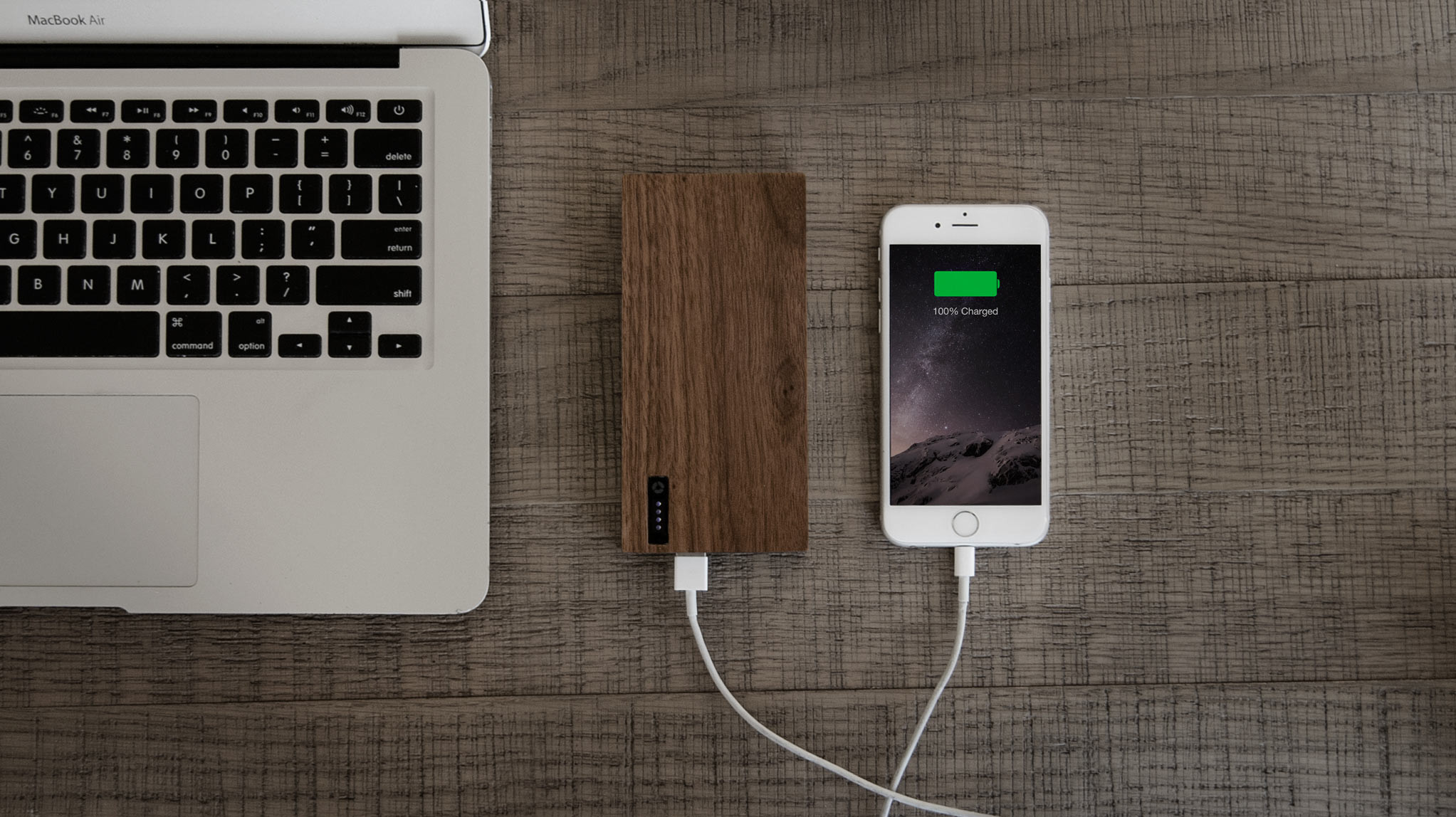 When it comes to style, Nomad’s PowerPlant is hands-down the best looking battery pack I’ve got my hands on, and you can read my full review of it here. Made out of solid American walnut wood, this 12,000mAh battery certainly looks the part — just be prepared to pay a pretty penny for it. It costs £60.

Now I’ll be real with you: you could easily buy three different high capacity battery packs for the same price as this one. The thing is, the PowerPlant just looks so damn good. If you’re a sucker for good design and the rustic wooden look, you may find this one tough to resist, but if you’re chasing value then look at some of the cheaper options on this list. 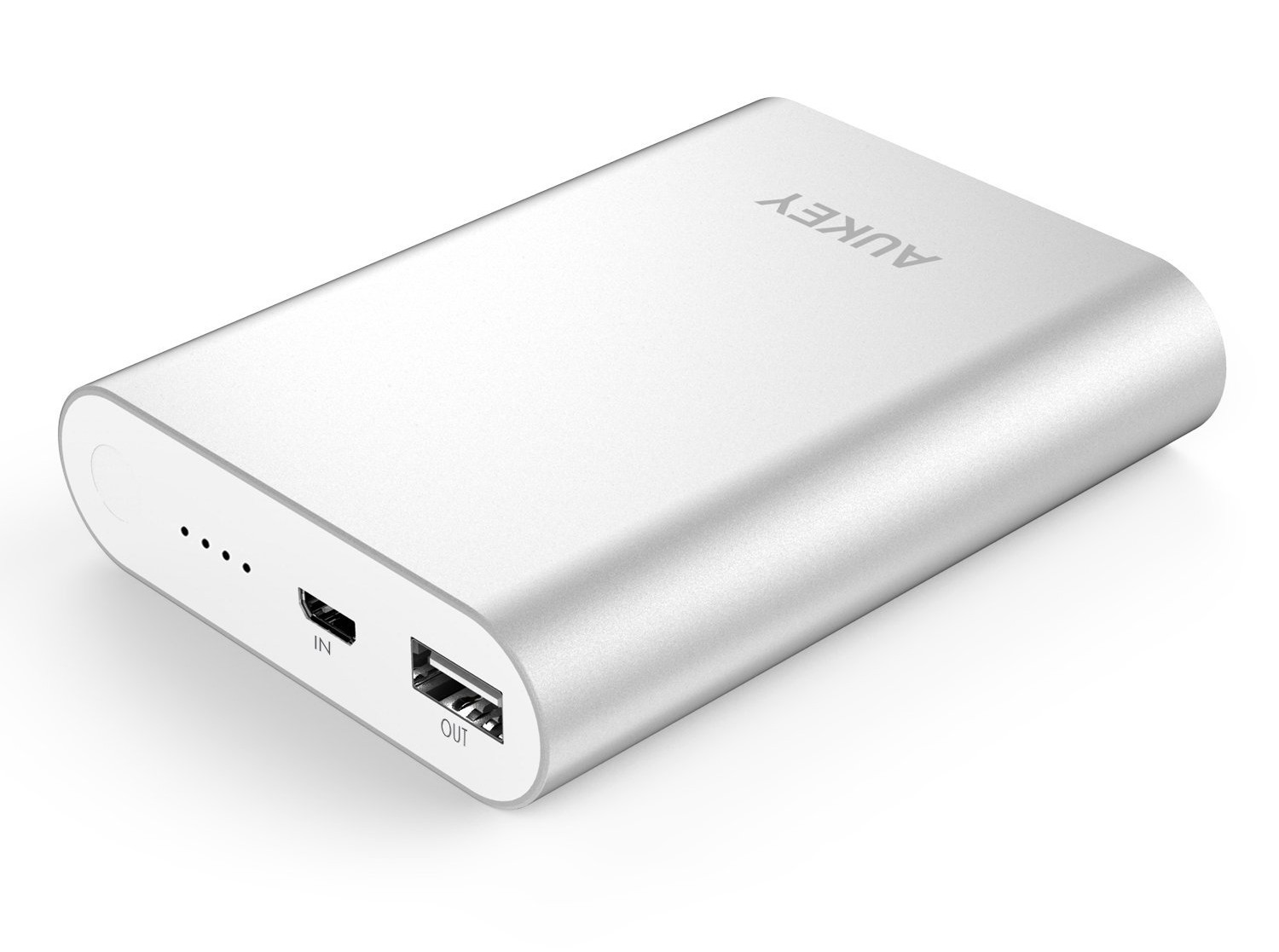 On sale for just £17, this Aukey battery pack is a strong contender for your money. You’re getting a very premium feeling battery pack here with an aluminium shell topped off with glossy white panels on either end of the unit. And while it has a certain heft to it (which adds to the premium feel), it’s quite a compact design that I can comfortably fit into my jacket’s inside pocket.

The 10,400mAh capacity is great, and even though you’re restricted to a single USB port it’s packing Qualcomm Quick Charge 2.0 technology, allowing you to charge up your tech up to 75% faster than standard chargers. (For devices that don’t support quick charge, the Aukey power bank still charges up at 5 volts / 2.1A). Aukey also throw in a micro USB cable which is something I expect from these power banks. 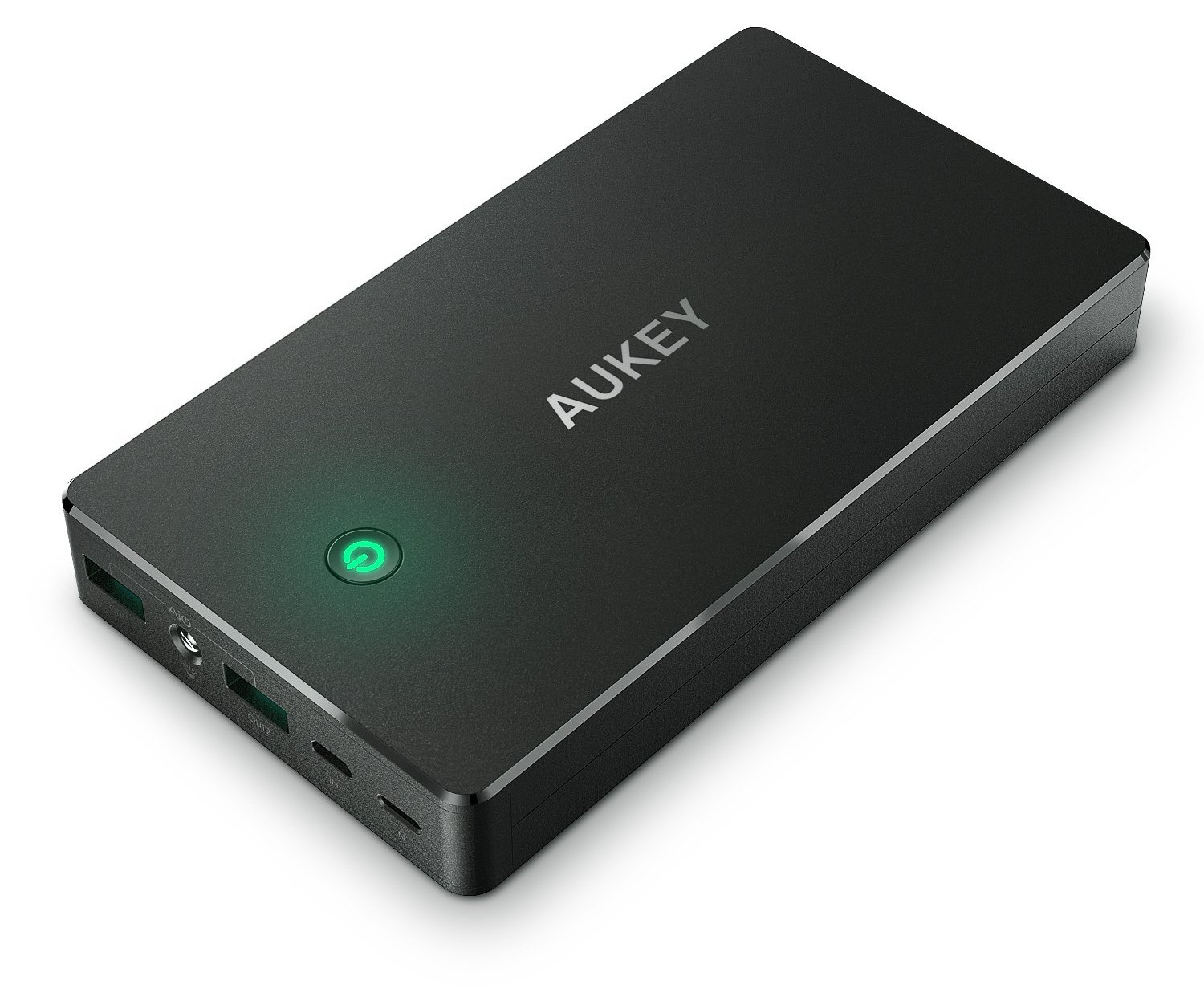 For the price, this Aukey 20,000mAh battery pack is serious value for money, especially if you’re looking for a higher capacity unit. Where other battery packs need a micro USB cable to charge up, this unit can be recharged with the same Lightning cable you use for your iPhone and iPad — convenient for someone who owns mainly iOS devices.

Although it’s limited to a total 3.4A output, each of the USB ports can push out 2.4A when used one at a time. This power bank also packs Aukey’s Smart Charging Technology which detects what device you’re using and charges with the optimal current for it.

The unit isn’t the lightest you’ll find so you’ll ideally want to keep it in a bag, there’s an integrated torch, and rather than using LED indicators Aukey lights up the power button instead — with a range of colours giving you an idea of how much charge is left. Overall, it’s very good value for the price. 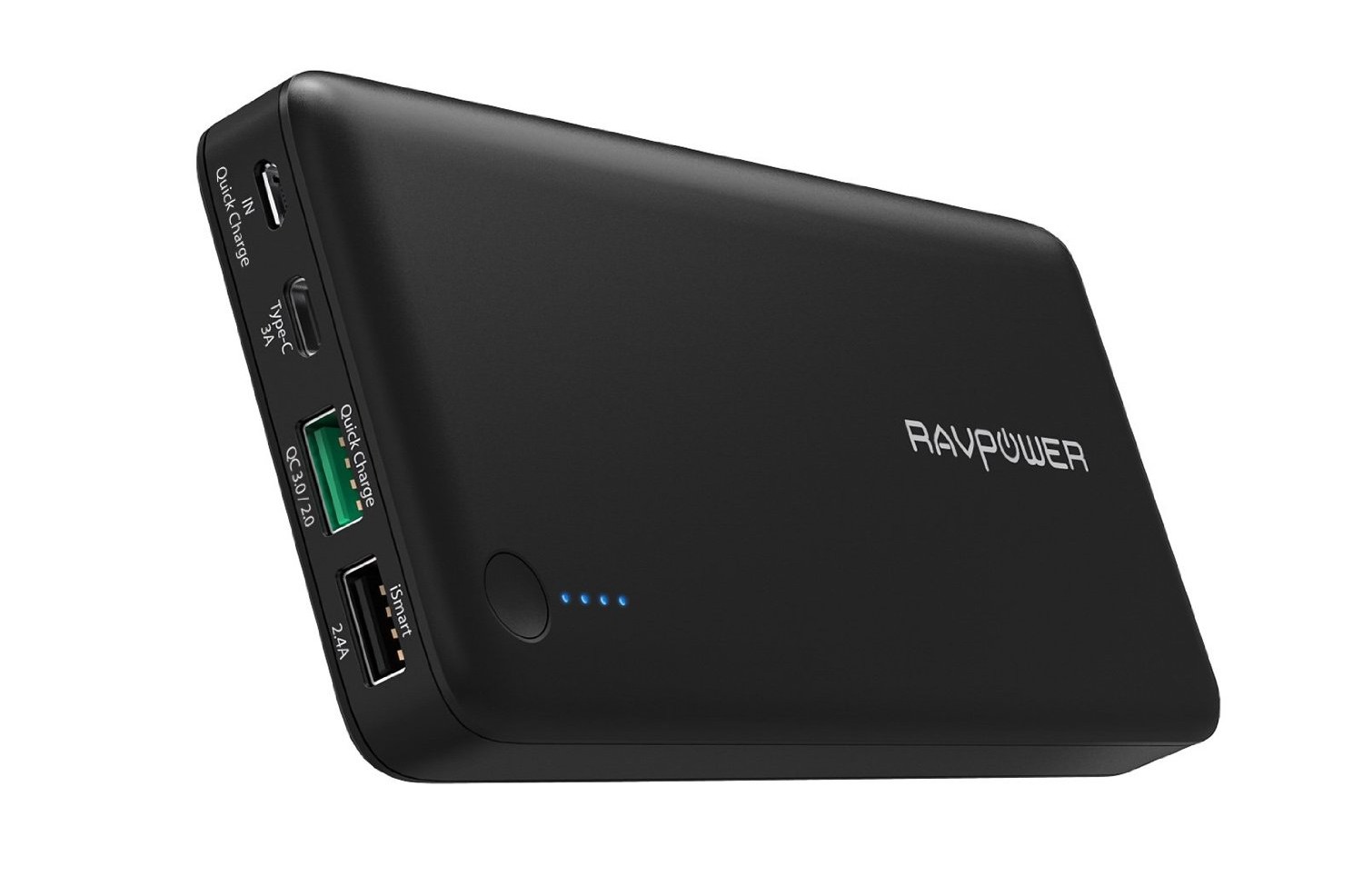 If you’re a heavy-duty user, own a device compatible with quick charging or has a USB Type C port, this RAVPower battery pack is probably going to be the most appealing to you.

As if a monster capacity of 20,100mAh isn’t enough, you’re also getting two powerful ports on this RAVPower battery pack: one Qualcomm Quick Charge 3.0 port that can charge compatible devices from 0-80% in just 35 minutes, and another 2.4A port. The Quick Charging also works when recharging the unit; the RAVPower battery can be recharged to 100% by a Qualcomm 2.0 adapter in just 5 hours. (Read more about Quick Charge 3.0 over at Android Authority.)

The USB Type C port on the RAVPower battery pack can be used to power your Apple MacBook or any new Android device using it, and you can even recharge the unit with the same port. It’s good to see LED power indicators on the top of the unit, and RAVPower even throw in a travel pouch as well as two flat designed micro USB cables in the box. 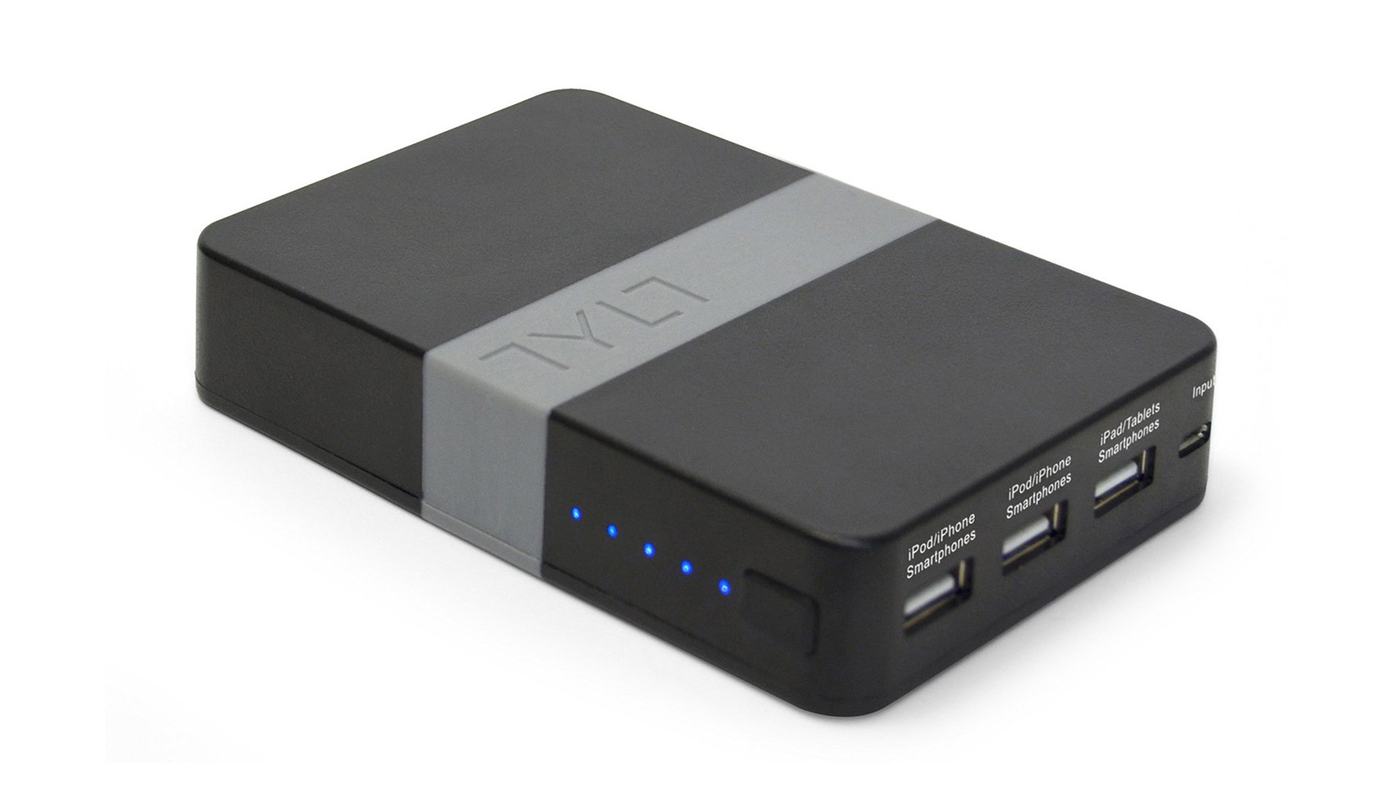 Tylt’s Energi 10K or 12K battery pack has a simple blocky design with LED indicators on the side of the unit, and three ports (two 1A ports and one 2.1A) you can use to charge up your tech — all at the same time.

They do throw in a micro USB cable which is nice, and you’re also getting 3 ports on this rather than just two. If you’re in need of a battery pack that handles many devices at once this would suit you, but that convenience is questionable considering the £57 price tag.

What should you buy?

If you’re a design-focused guy or gal that doesn’t mind splashing out for good looking products, the Nomad PowerPlant is my favourite of the lot. It’s a great looking battery pack and with a 12000mAh capacity it’s got plenty of juice to keep you going.

Android users with quick charge devices are best served by the RAVPower 20,100mAh Battery Pack. For £30 you’re getting two powerful ports and with USB Type C, you’re buying something future proof too.

Just looking for the best bang for your buck? Auk’s 20,000mAh battery for £18 gives you a large battery and the useful ability to recharge with Lightning cable.

Which one (if any) would you opt for? Let me know in the comments!