See, the problem with home security solutions is that they’re usually too complex or technical for the average Joe to figure out.

Blink is so simple that your mother could install and use it, and with a 100% wireless design you’ll have a clean, uncluttered home too.

Blink’s home security camera units are small and inconspicuous; little white boxes that can seamlessly blend into your home environment. And at 30mm thick and 70.8mm wide, a Blink camera can fit into the palm of your hand, meaning you can squeeze it into the smallest of spaces. 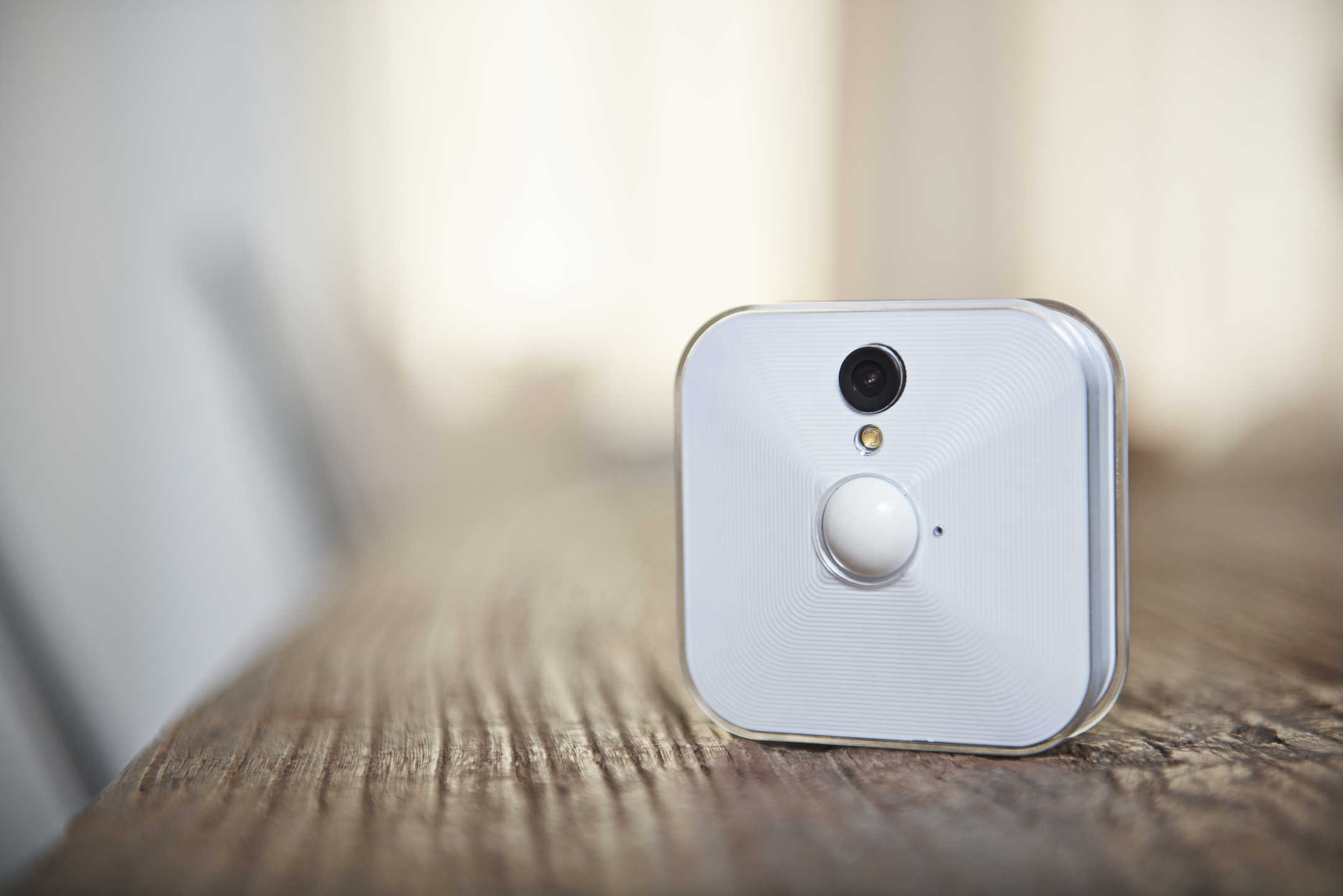 The internal camera records at 720p (a small downfall because full HD would have been nice) and it packs an LED illuminator so that the camera can record well in low-light situations. There’s an on-board microphone too, however it only works one-way so while you can hear everything at home, you can’t communicate from your end.

A big bonus with Blink cameras is that they work entirely on AA batteries, meaning absolutely no cables. I’ll get onto the battery life performance further down, but having a wireless security camera setup is brilliant because you can place the cameras anywhere without having to worry about trailing wires. 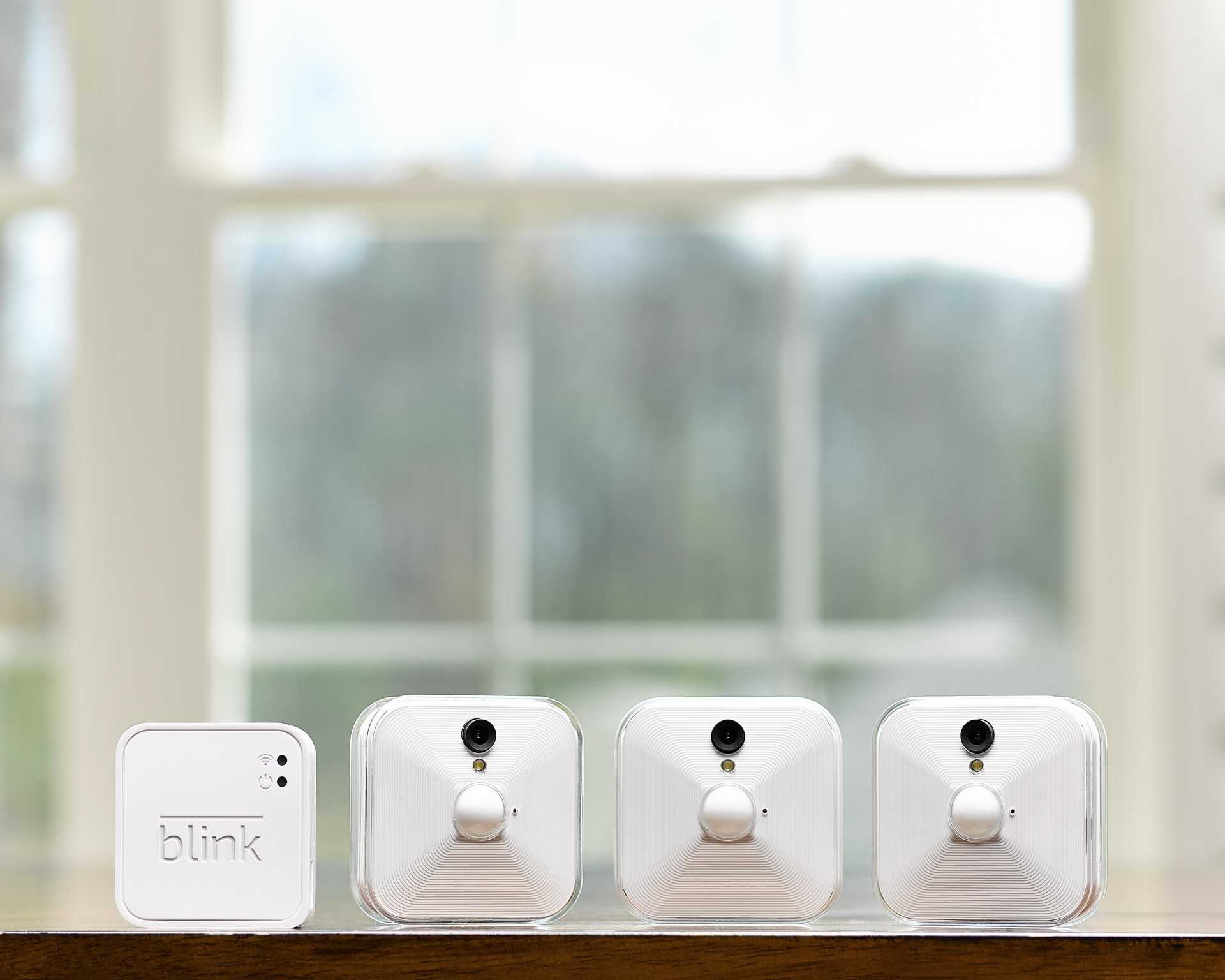 Whether you opt for a single camera setup (£129.99) or five (£399.99), Blink comes with a “Sync Module” that plugs into any wall socket and acts as a hub for up to ten cameras and Blink’s cloud service. (That’s where all of your motion detection clips get stored for instance.) Once you plug that in and follow the setup wizard within the Blink app for iOS/Android, you’ll be up and running in a matter of minutes.

Then, you just take the cameras and place them wherever you want within your home.

I was initially sceptical about Blink’s battery life — devices running on batteries never tend to last very long — but to my surprise, Blink’s claim of 2 years battery life is beginning to seem viable. I installed a two-camera system on the 20th of April and we’re now in early/mid June with the cameras still going strong. Frustratingly however, the Blink apps don’t give you an idea of battery levels — just an “OK” which isn’t very helpful.

Just remember: your mileage with battery life is going to vary based on where you place it, how frequently the motion detection trigger goes off and how often you stream live video for example. (It would be wise to set yourself quarterly reminders to check the battery levels.)

Battery life out of the way, I love how comprehensive the Blink application is — particularly in comparison to other consumer security cameras I’ve used.

The home screen gives a quick-view of each Blink camera, so if I tap the video icon on the left I’ll get real-time video footage of my living room. Tapping on the photo icon to the right instead, Blink will produce a photo snapshot of that room instead which is great when you’re low on data, are dealing with slow internet or simply want a quick peek.

That said, you can’t randomly record a video clip while watching a live feed which is a little frustrating. Either you have motion detection on all of the time (which will automatically record clips), or you don’t get saved clips.

There’s also a dedicated camera settings menu you can access by tapping the cog above each camera view. Here, you can view the Blink security camera’s battery level, temperature, WiFi connectivity strength and other settings like motion detection sensitivity, the length of the video clips and whether to record audio.

The folder icon on the top-right of the app is where you can access all the recorded motion detection clips. Blink will store up to 7,200 seconds of video (or 1,440 five-second clips) at which point your older videos will start getting overwritten. For a standard household it’s plenty of storage and best of all: Blink includes the storage for free.

As well as dedicated camera settings, Blink also has generic settings you can access.

At the top of the app there’s a primary menu (called “Home” in my case) where you can set up a schedule for motion detection and select your timezone. Once you configure your motion detection schedule — say 00:00 until 06:00 — the app will push a notification to your phone. It has worked very reliably for me and the clips tend to load pretty quickly.

Having tested a number of security cameras already, I feel really confident in recommending the Blink home security cameras. The motion detection feature works well (especially with scheduling), clips are stored for free, it works wirelessly, is intuitive to use and importantly it’s affordable.