The Bad: No mains adaptor, a fraction weighty.

The Bottom Line: One of the best compact speakers around, albeit with retro looks that will divide opinion.

In the space of a few short years, House of Marley has become a major player in personal audio. The company’s unique range of eco-friendly speakers and headphones has rapidly gained popularity, both for its appealing looks, and its weighty sound.

Having previously reviewed and been impressed by two products in that range — the Get Together, a large portable speaker, and the Liberate headphones — it is now time to try the compact Liberate BT speaker. It has Marley’s signature look, and at a R.R.P. of £99.99, it fits into the firm’s usual mid-range price point. But can it deliver the sound quality and usability to match?

The combination of bamboo cladding and fuzzy grey “REWIND” material made from recycled plastic, hemp, and cotton is becoming familiar to me. House of Marley products have a distinctive style, and I quite like it. As with any bold statement, however, it is likely to divide opinion. 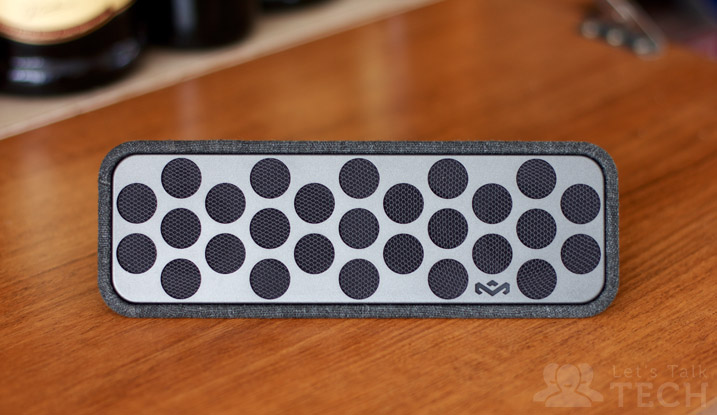 The Liberate BT is slightly more subdued in its tastes than some of its siblings. It is an oblong shape, which makes the speaker frontage tip upwards slightly. From face on, all you can see is various shades of grey — a metallic fascia with a regular pattern of circular cutouts, on top of a near-black speaker mesh, within a fabric frame. The top, sides and bottom are all covered in more of that composite fabric, which looks like it has been ripped straight off a 1970s sofa. On top, small white icons provide visual cues for the otherwise hidden controls. The thin rear of the speaker has “MARLEY” emblazoned across a strip of heavily stained bamboo. At each end of this panel there is a silicone flap: one conceals a USB port for charging, while the other lifts to reveal an auxiliary input. 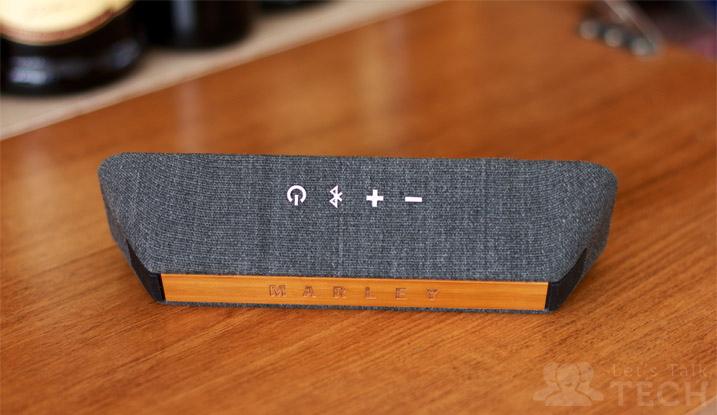 House of Marley’s signature bamboo cladding can be found at the rear.

Unlike some of House of Marley’s products, the Liberate BT doesn’t shout “retro” in your face; if you don’t like the bamboo, you don’t have to see it in everyday use. But as someone who prefers this slightly softer look over the scientifically clean surfaces of Beats by Dre, it still works well.

About that shape — it is a bit weird. It provides a solid base, certainly. But why you would want to project sound upwards, given that it naturally rises in normal atmospheric conditions, is a mystery. This angle also means that you have to crane your neck over the top of the Liberate BT in order to see the controls. 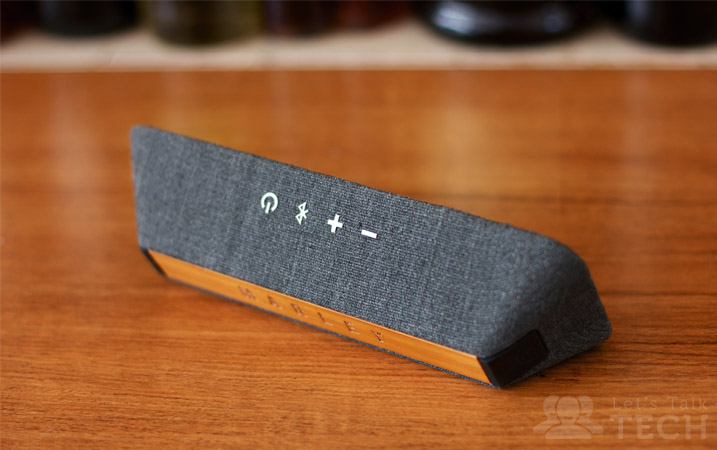 In all other respects, though, this is a well-designed speaker. The four controls (power, Bluetooth, volume up and volume down) are seated far enough apart to avoid mistakes, and the two ports suffer from no problems with accessibility. On the front, the House of Marley logo lights up red to acknowledge that the speaker is on, and flashes blue when Bluetooth pairing is being attempted. Wireless syncing was speedy in my testing, and the connection was strong enough to make it into the next room.

At just over eight and a half inches long, and just under 3 inches deep, the Liberate BT is clearly portable. Not that the exterior fabric feels like it would appreciate the rough and tumble of being in a rucksack. However, this speaker has an internal battery which offers eight hours of playback per charge, and whilst the whole unit is far from light, neither is it unreasonably heavy. It is just a shame that House of Marley didn’t feel the need to include a mains adaptor (you only get a USB-to-Mini USB cable).

Many speakers of this size are lighter than the Liberate BT, and not in a good way. They feel a bit hollow. In contrast, when you pick up the Liberate BT, it feels notably solid. This can probably be attributed to the audio equipment it contains — rather than the standard stereo setup, the Liberate BT has an array of four 1½ inch drivers inside. 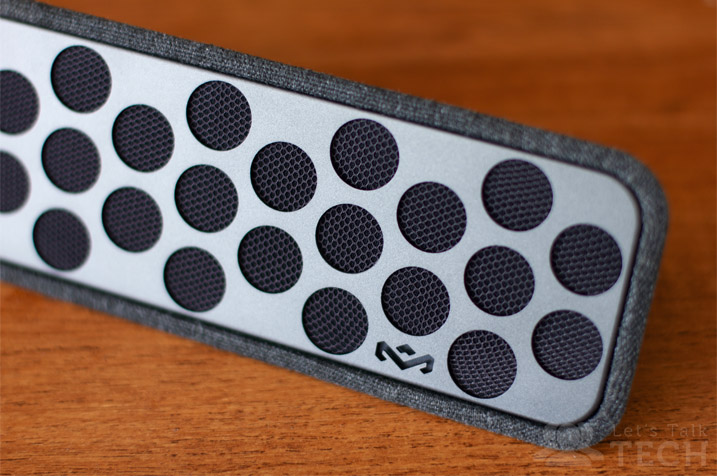 Behind that grille is an array of four drivers.

The resultant sound is big and bold, yet with plenty of detail. The bass puts speakers twice the size to shame, and although the trebles can be harsh at times, the subtle ambience of brushed drums and plucked guitar strings is reproduced perfectly. The mid range is probably the weakest point, but even here, the listening experience is reasonable.

Volume-wise, the Liberate BT can take the roof off, although at this end of the scale, sound quality suffers. For party anthems, this doesn’t matter — the combination of a strident top and a deep bass should be a crowdpleaser. For other music genres, playing around with iTunes’ equalizer can bring back much of the desired clarity.

Picking a speaker from the under-ten-inches category is usually an exercise in avoiding sound degradation. But with the Liberate BT, House of Marley has made a small speaker that is genuinely pleasant to listen to. It is also nicely designed, with good build quality and usability, and a battery life of eight hours is not to be sniffed at.

It must be said that if you’re looking for a truly lightweight speaker, this isn’t it. The combination of REWIND fabric and bamboo does not give me any confidence that this speaker would be happy to take regular trips outside, either. The lack of mains power adapter in the box is also a major annoyance.

Overall, however, the Liberate BT is a triumph, and a reasonably priced one at that. Unless you have an overwhelming objection to how it looks, I would recommend it to you as one of the best compact speakers around.