If there was ever a Samsung product that generated a worldwide buzz prior to its release, the Samsung Galaxy S4 was it.

After all, it was thanks to its predecessor, the S3, that Android-based smartphones became so popular and began to challenge the dominance of Apple’s iPhone in the smartphone market. It’s no surprise then that Samsung had a lot of pressure to deliver with the S4’s release, and boy did they do just that.

Having used the S4 for a couple of weeks for myself, here are my own thoughts about their latest powerhouse smartphone.

The aesthetics of the S4 honestly have me torn. While it’s lying on my desk, it’s an absolute beauty to look at. The brushed metal effect surrounding the rim of the phone adds a premium look to it and the thin bezel pushes that beautiful 1080p resolution display to the edges, creating a great viewing experience. 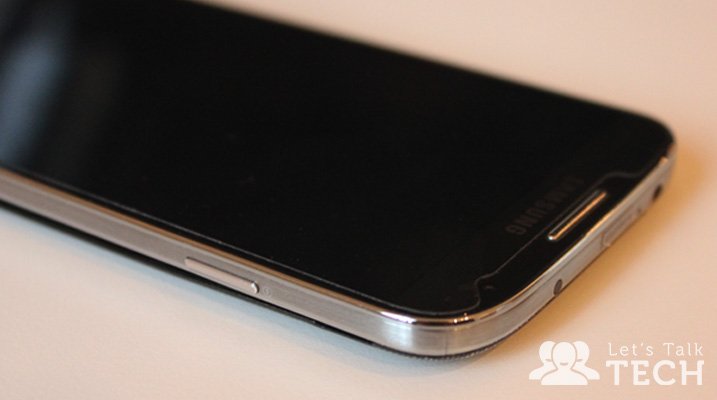 Unfortunately, the problem is whenever I pick it up – it simply doesn’t feel like a top of the range handset unlike unibody smartphones such as the iPhone 5 or HTC One.

Instead of opting for the flush unibody build, Samsung has once again opted for a plastic back cover that has a slippery, low-end feel to it which also happens to be a fingerprint magnet. On top of that, the ‘brushed metal’ rim I like so much is actually plastic too; which is a shame because that’s what gives the phone its premium look.

Maybe the reasoning behind the plastic back is to allow memory expansion and battery exchangeability, but considering that the S4 is Samsung’s flagship device I did expect a superior build quality so that’s something that I find hard to overlook. 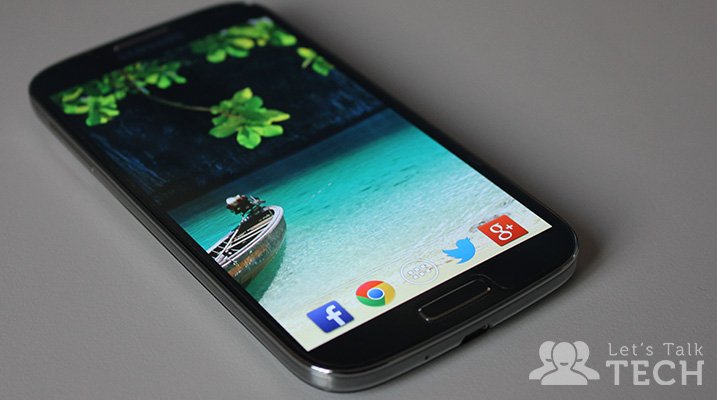 If you’re a fan of high definition screens, you’re going to love the 5” AMOLED 1080p resolution display on this. The colour reproduction is rich and vibrant (although certain colours can be slightly exaggerated at times) and the 441 pixels-per-inch (PPI) density has actually been one of the highlights of using this phone, because it genuinely makes viewing media and browsing the web that much better.

Regardless of what phone you’re currently using, you’ll automatically appreciate the quality of this display and will probably struggle to put the phone down because everything looks so good on it.

The biggest thorn in our sides when it comes to phones has to be poor battery life. It’s a thorn that’s a lot less painful with the Samsung S4 though.

This powerhouse phone boasts a 2600 mAh battery that trumps both the HTC One’s 2300 mAh and iPhone 5’s 1400 mAh battery. The icing on the cake here is that the S4’s battery is both more powerful and exchangeable unlike the other two, making it easy to swap over batteries for backup purposes.

Of course the downside is that the removable battery comes at the expense of build quality – specifically in terms of that cheap feeling back cover.

On the performance front though, I was really impressed with the S4’s ability to last the whole day even during heavy usage. Of course I wasn’t watching movie marathons all day, but it handled tasks like emails, social media, messaging, calling and other day-to-day functions well whilst still having some juice to spare.

As with most phones, you’ll have to decide for yourself which of the phone’s default settings you want turned on (like GPS & Bluetooth for example) so that you can optimise the battery life – but overall you’ll be happy to know that the S4 won’t be needing regular mid-day charges.

The S4’s camera and integrated software features are really impressive by smartphone standards. In comparison to the HTC One’s 8-megapixel and iPhone 5’s 4-megapixel cameras, the S4 has an impressive 13-megapixels and it’s clear from the options in camera mode that Samsung has brought its experience with digital cameras to this phone.

With so many camera modes to choose from like Panorama, HDR, Sports and Best Face (amongst others), you’re unlikely to miss your digital camera when you own a Samsung S4.

Best Face is one of my favourite modes and is similar to the Blackberry’s Timeshift feature – because you can go back to select the photo that looked best from a series of 5 photographs. If you have a friend that’s usually guilty of closing their eyes during a group photo for example, just pick another photo out of the 5 and problem solved.

Beyond that, there’s also the functionality to create GIFs without leaving the camera app, take ‘Drama Shots’ that capture a series of movements and Dual Shot, where you can simultaneously take a picture using both the rear and front cameras. When you consider that the iPhone 5’s camera only has Panoramic and HDR photos to brag about – the Samsung S4 is definitely a step ahead in the camera category.

The Samsung S4 has more software features than you’ll know what to do with and although it’s nice to have options, it comes at the cost of storage space – over 6GB of it. Once you unbox your phone and are ready to start using it, you’re left with just over 9GB of storage space which really isn’t much. Sure, you can insert an SD card for extra storage, but that space can only be used for media and not apps which is a drawback. Besides, when you purchase a 16GB phone you expect to be able to use near enough that amount!

Air Gesture and Smart Scroll happen to be two features that I didn’t think I’d make use of but they can be useful when you can’t physically touch your phone for any reason.

The Air Gesture felt very hit and miss to me because it was really inaccurate at times, especially when scrolling in the browser. Smart Scroll on the other hand uses your head’s tilt to scroll up and down a page, which I found to be a lot more accurate & controllable, and is one feature I wound up keeping turned on.

Other features like Smart Pause, pause videos when you look away and resume once you look back; which goes a long way in helping to boost your battery life. It doesn’t hurt that you won’t end up missing the important parts of your video too!

The flip side to most of these features that Samsung included, is that they only work with their own apps like ‘Internet browser’. Try using Smart Scroll in the Chrome browser and you’ll end up looking like a bobble head on the dashboard of a car – it just won’t work.

Beyond that, there were small little things that made the S4/Android experience enjoyable to use, like multi-tasking windows, the way Facebook messenger would sit subtly on top of any app I was using and how articles I saved to Pocket for later reading would save & sync automatically in the background (unlike with iOS). In comparison to an iOS device, it felt a lot more fluid and efficient in getting stuff done!

Whether you’re a fan of Android or not, you’ll love this phone and the rich functionality it offers; especially when you pair it with third party applications like Swype Keyboard or Nova Launcher to create a truly personalised device.

Although Samsung’s decision on build quality feels like a major compromise to me, it’s nothing that a nice cover won’t fix. Plus, there’s no denying that it’s a powerhouse of a smartphone with impressive & efficient hardware, an amazing display and an abundance of software & features that make it both efficient and a pleasure to use.