The Bottom Line: For the audio perfectionist, the Boom Evolution may fail to impress. For bass lovers, it will probably be unrelentingly pleasing.

Any speaker with “Boom” in its name tends to fall into one of two categories — those which are genuinely room-shaking, and those which are merely marketed as such. British manufacturer Kitsound wants us to believe that the performance of its Boom Evolution Sound System 2.1 matches the name. At £199.99, it is mid-range, but as my previous tests have shown, neither price nor form is a good indicator when it comes to the quality of Kitsound products.

What we do know is that this particular unit has 110 watts of power with which to reproduce tunes, and the backing of consumer magazine, Which?. But how does it perform under the scrutiny of the Let’s Talk Tech test lab (a.k.a. my kitchen)? Time to find out…

From a few feet away, the Boom Evolution is a speaker with visual polish. The actual cabinet is made from wood, but it is covered by glossy surfaces. A metallic volume dial, complete with central LCD display on the front adds to the high-end feel. Six subtly presented controls encircle this dial, and on either side, the speaker mesh is pleasingly fine. The whole thing rests on four rubber-soled feet, suspending the main body of the Boom by about two inches, and giving it the appearance of a modernist architect’s model. The purpose of this elevation is to allow sound to emanate from the other primary sound outlet, a downward facing grille on the underside of the Boom. 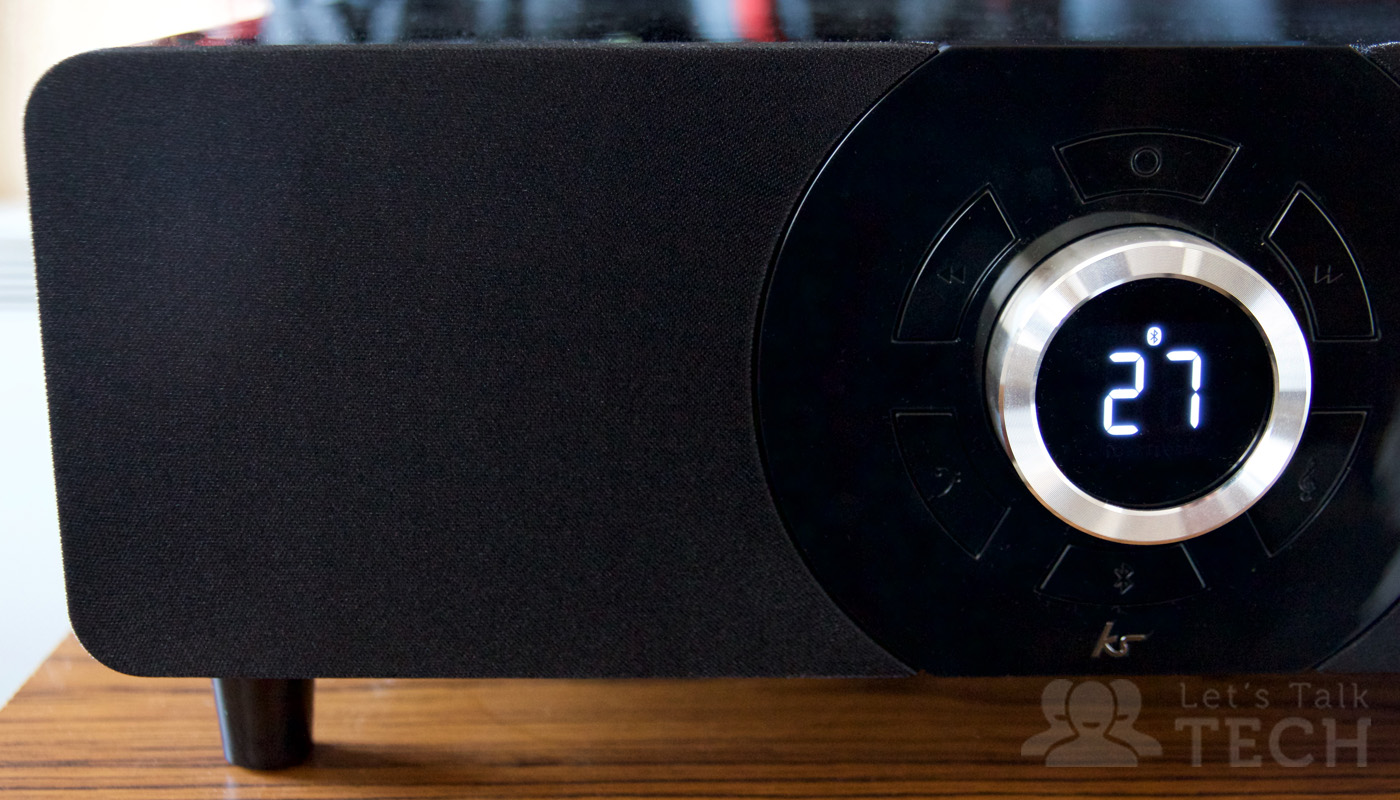 The Boom Evolution looks better than it feels.

With closer inspection, however, it is clear to see that this isn’t quite the premium product it first appears to be. The glossy finish is somewhat plasticky, and prone to picking up dust and fingerprints. The controls on the front are unpleasantly hollow, and the edges of the speaker mesh are a touch rough. Maybe I’m being picky. Maybe I just wouldn’t want to spend £200 on an imperfect product. That said, if you are happy for a speaker to be a speaker, rather than a work of art, the Boom gives a good general impression.

In most regards, the Boom Evolution offers fairly standard fare when it comes to functionality, but it does have some nice extra touches. For instance, rather than sticking to a basic line-in socket, you get a pair of auxiliary stereo inputs — useful if you want to hook the Kitsound up to your TV or home cinema. The speaker also has a clever kind of in-built equaliser, which lets you adjust the treble and bass output, each on a sliding scale of one to six.

Elsewhere, the functionality is more mainstream. You get a remote — albeit an unusually circular one — and wireless connectivity via Bluetooth. Around the back, a Micro USB socket provides charging facilities for a phone or tablet. 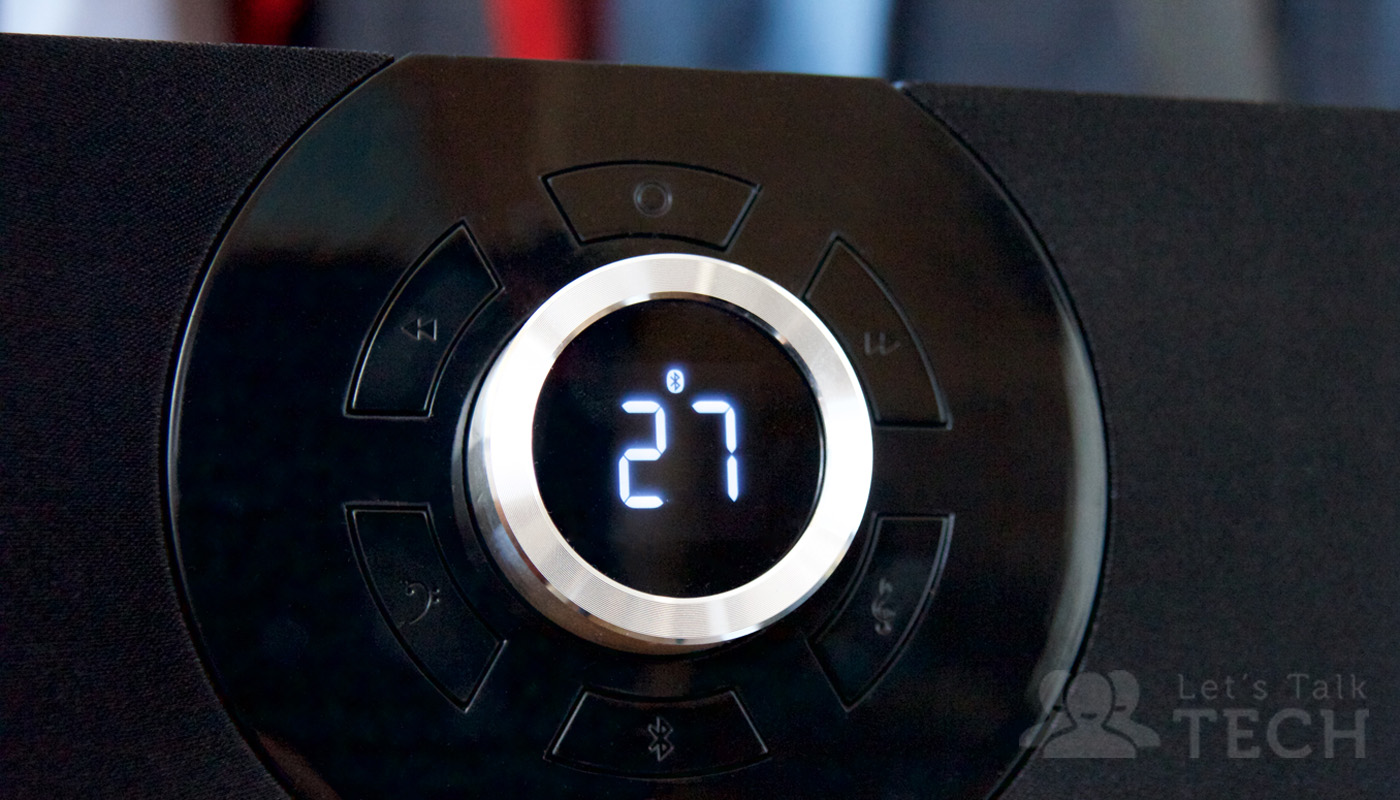 The physical controls are nice to use.

Controlling the speaker is pleasantly simple. Most of the controls are push buttons, and those on a sliding scale (the volume and the equaliser) are adjusted using the front-facing dial. Likewise, the Kitsound requires very little by way of setup — it automatically shows its face to other Bluetooth devices unless you switch to auxiliary input.

As any musician knows, there is always a fine line between being a crowd-pleaser, and losing your outright quality. This speaker walks a similar line. Left on its default equaliser, it truly lives up to the Boom name — the bass it produces is huge. It is the kind that shakes the chair you are sitting on. If you like the physicality of club audio, then this is a little slice of heaven in your room. 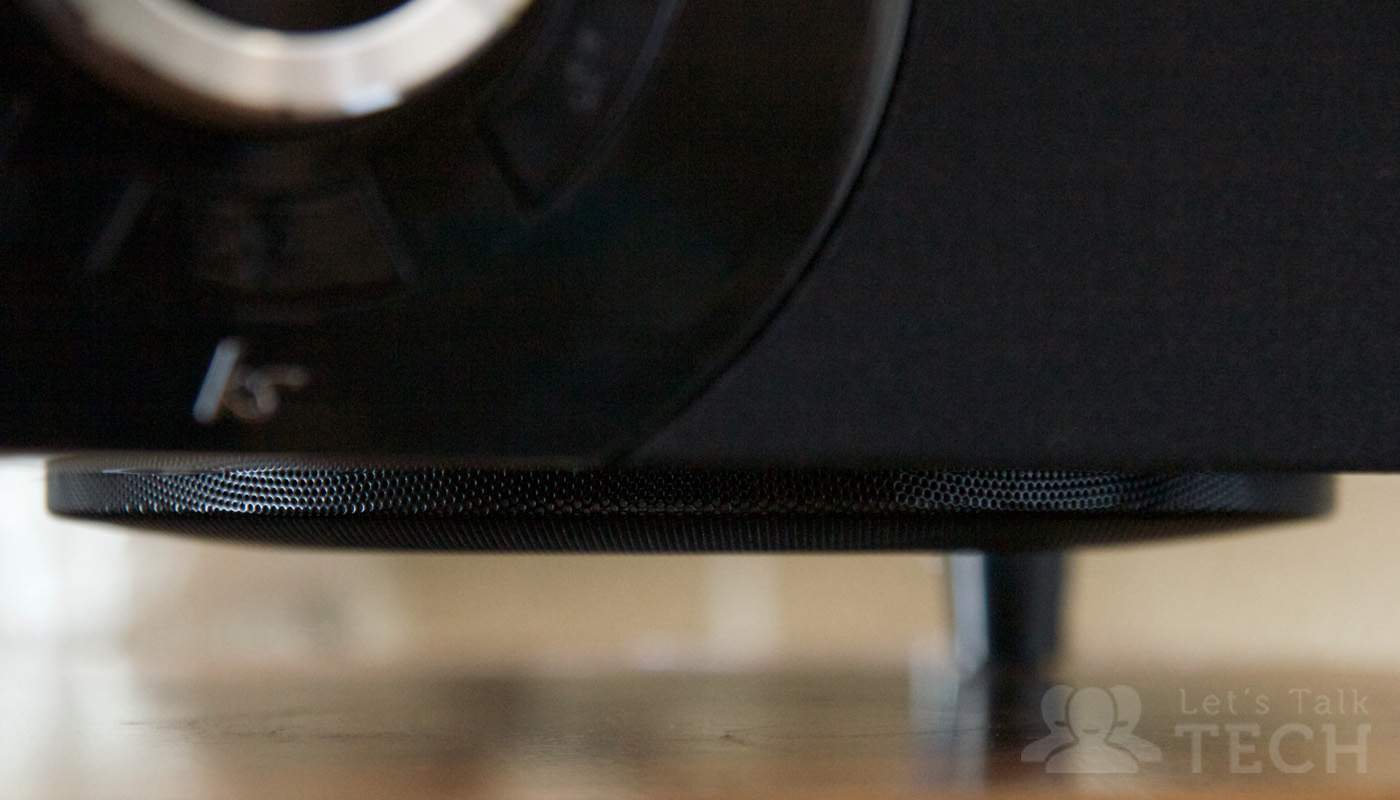 This opening is where the bass booms out from.

But away from those pounding low frequencies, the Boom Evolution is rather timid. While the trebles are somewhat hushed and metallic, the mid-range is positively inaudible at times. The overall impression is one of imbalance, where the concert-like resonance of the bass is not matched by the higher register. For the compressed, electronic sounds of MP3 chart hits, the effect is less pronounced. For acoustic or classical pieces, it is far more off-putting.

This is definitely a speaker for a party soundtrack, then.

I questioned, at the start of this review, whether Kitsound’s Boom Evolution could provide the sound to match its name. Undoubtedly, it does. The thunder that emanates from this low-profile speaker is quite remarkable. Folks with a thing for bass will certainly be happy listeners. It is also an easy-to-use and reasonably handsome device.

For the subtler parts of your playlist, the Kitsound’s audio quality is less impressive. Even after adjusting the equaliser, trebles do not carry the same weight as that almighty bass, and the quality is far from ideal. Considering the £200 price tag, the build quality of the Kitsound is somewhat underwhelming, too.

For the audio perfectionist, the Boom Evolution may fail to impress. For bass lovers, it will probably be unrelentingly pleasing.