Summer is near, and outdoor living is on the way. Now, more than any other time of year, is when audio manufacturers seek to entice the buying public with portable speakers.

KitSound is one such outfit, and the Pocket Hive is the most portable speaker in the British firm’s range. It is unusually shaped — hexagonal, mimicking honeycomb — and competitively priced at a R.R.P. of £40. It is also the second product from KitSound that I have tested in recent weeks, the first being the Cube, a party light-up speaker which failed to impress in anything other than vibrancy. In appearance, the Pocket Hive could not be more different, but in a good way. But can it back that up with sound like honey? (Sorry.) 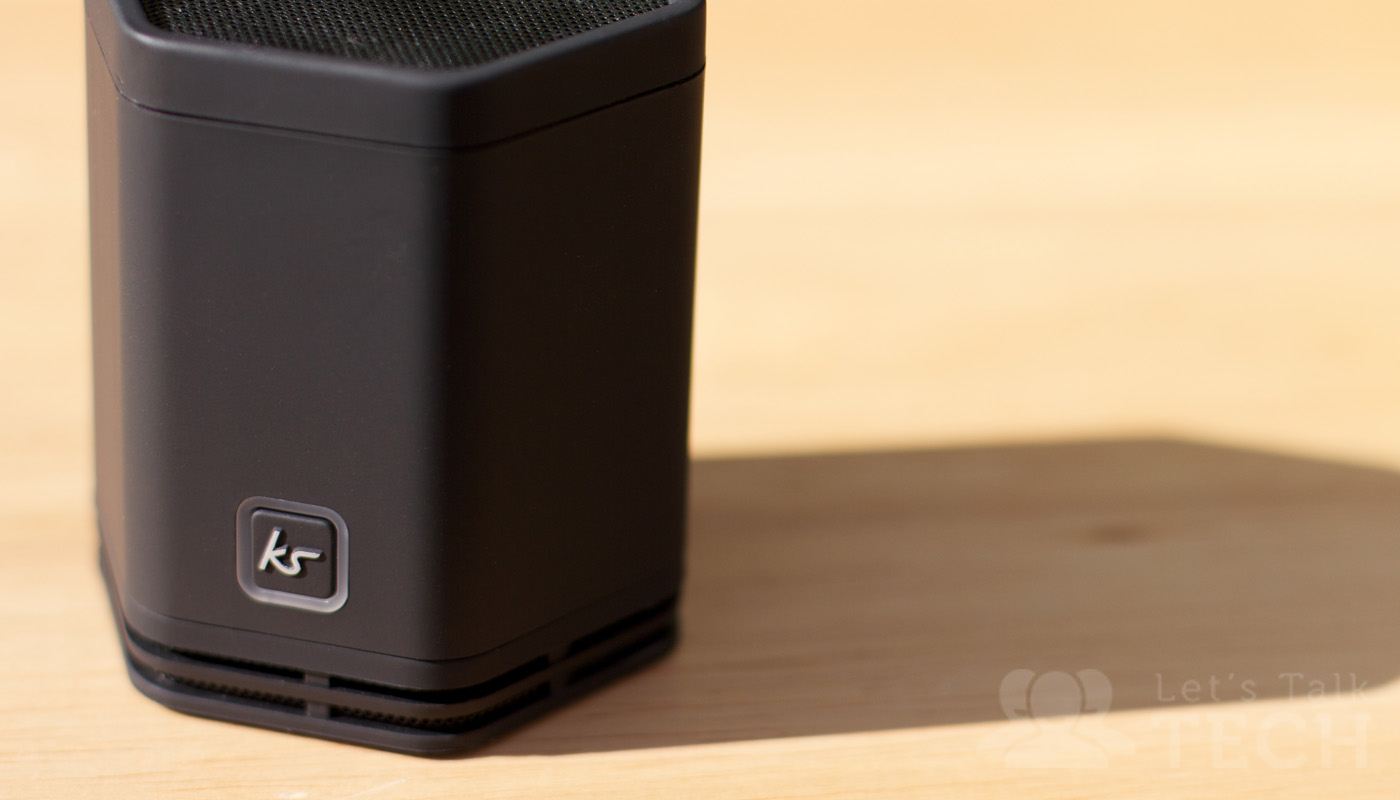 A single control is the only break in the Kitsound’s sleek hexagonal form.

This speaker really is a handsome little thing. Its six-sided form lacks curves, and yet it is surprisingly pleasing on the eye. This is aided by the soft, jet-black silicone which covers the main body of the Pocket Hive. It only stops for the tight, dark-silvery mesh of the speaker grilles. The feeling of sleek minimalism is enhanced by the sheer lack of visual distractions on the Pocket Hive’s surfaces. A single button at the front handles all the available controls, and the three ports at the rear are neatly arranged in a row. 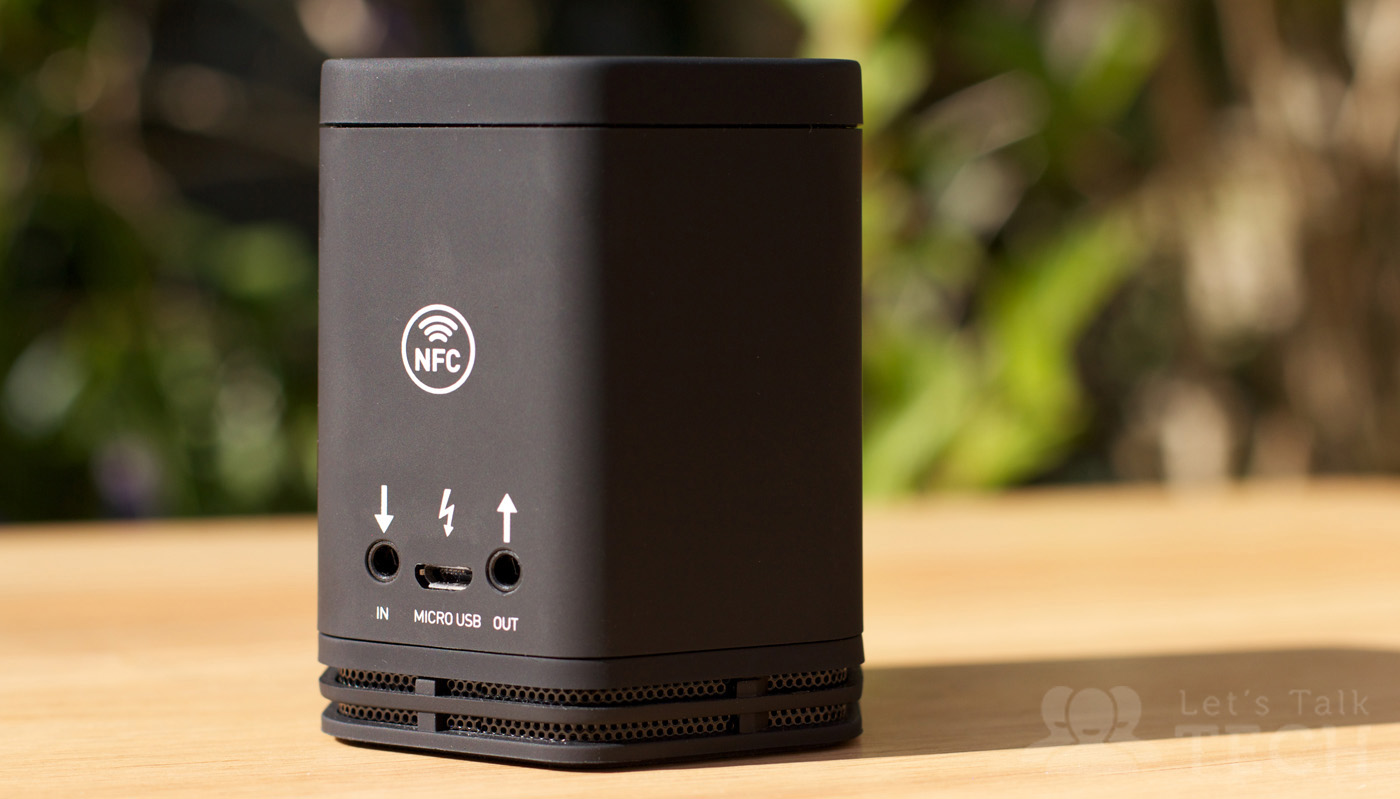 You can tap your phone here to connect to the speaker.

Notably, the KitSound feels reassuringly well built. It has a solid weightiness in the hand, although it is definitely portable — at only 8cm tall, I can easily grip it between my index finger and my thumb. Apart from a slight tendency to collect visible fingerprints, it does not suffer from any rough edges. 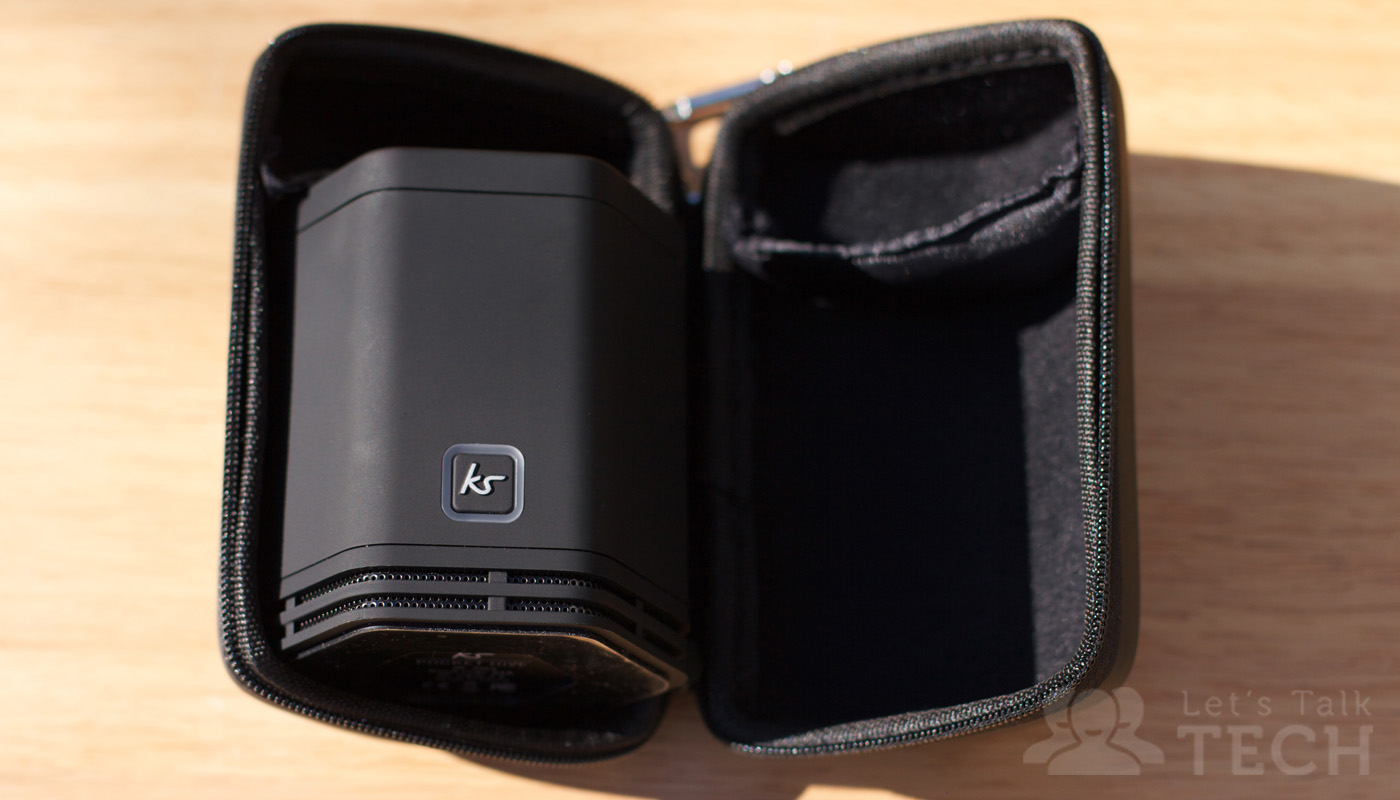 The Pocket Hive’s tall, top-heavy packaging might be held together with strips of cellotape, but KitSound has been quite generous with what they have included with the Pocket Hive. As usual, there is no mains adaptor for charging, but there is a USB-to-mini USB cable provided, along with an auxiliary cable. The highlight, however, is a hard case in which to carry the speaker. It is truly protective, just as sleek as the speaker itself, and the kind of quality you would normally expect to pay extra for.

The provision of only one manual control — controlling power, wireless connectivity, play, pause and skip — should be a recipe for confusion and frustration. But it actually works. Holding down the button for three seconds switches it on, and unless the auxiliary port is being utilised, the speaker automatically goes into wireless pairing mode. If your phone has NFC abilities, you simply need to hold it near the logo on the back of the Pocket Hive to start sending tunes. Otherwise, Bluetooth is easy to set up and offers a good range.

Once the music is flowing, you can tap the button to toggle play/pause, or double-tap it to skip a track. The speaker is also capable of acting as a Bluetooth speakerphone, and you can daisy-chain multiple units together, via the auxiliary output, for greater volume. Charging takes about three hours, and a full tank will power the KitSound through ten hours of playback.

It is a well-rounded feature set.

It is unusual for a five-watt driver to be used in a speaker of this size. Understandably, KitSound is keen to emphasise that the Pocket Hive is equipped with such a component. The sound it produces is impressive, but I suspect that this should be equally attributed to the Pocket Hive’s overall design. 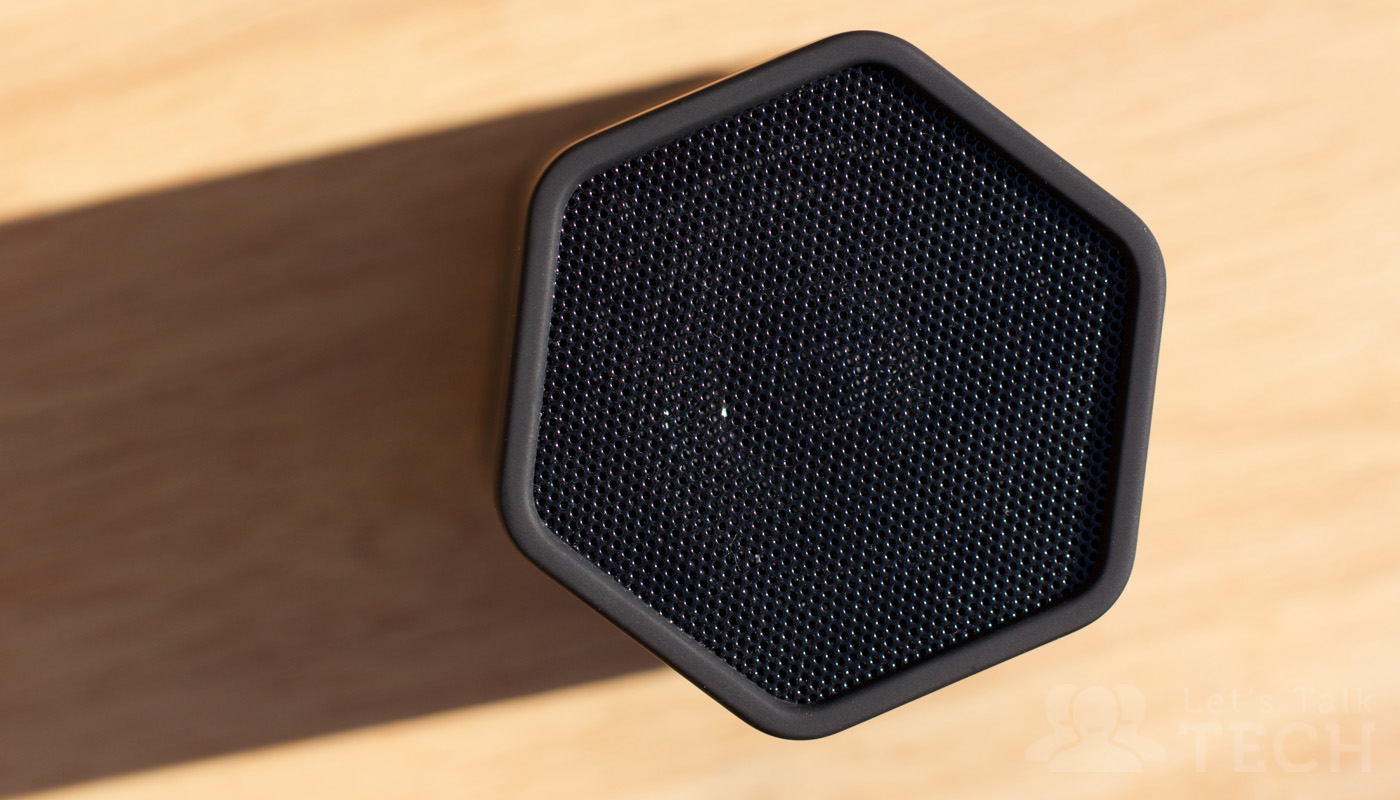 The upward projection of sound improves listening from most angles.

Rather than beaming sound out laterally, the grille on this speaker faces upwards. If you hang your head over it, trebles become unpleasantly harsh. But from all other angles, the sound radiates from the hexagonal body of the speaker, rather than this unshielded outlet. In addition, the base of the Pocket Hive is sticky, which means that it grips any hard surface it is placed on, using it as a giant bass amplifier.

The resultant listening experience is rich. Trebles are still a touch reedy, but basslines shake the table, and the mid-section copes admirably. It isn’t the loudest speaker around, unless you’re happy to put up with significant distortion, but the volume on offer is perfectly suitable for intimate listening. On balance, the Pocket Hive is best suited to electronically-produced genres, but it copes with funk and classic rock perfectly well.

There are many pitfalls for a tiny speaker to avoid in the big world of audio: tinny sound, unattractive pricing, short battery life, and so on. Somehow, the Pocket Hive has avoided all of them. It rivals much bigger speakers in terms of sound quality, while maintaining genuine pocketability. It has a good range of features, and an impressive battery life.

In fact, my only true criticism relates to the surface of the speaker, which is infuriatingly uncleanable. It is a shame, given how attractive the Pocket Hive is in every other regard.

For £40, however, KitSound is offering magnificent value here. If you’re looking for a speaker to take on your summer holidays, this is it.