Western Digital’s range of USB powered external hard drives — like the My Passport Ultra for instance — are fantastic options for affordable, portable storage… for your average consumer anyway.

The trouble is, when you start to need a little more oomph from your drive’s performance, USB 2.0 and the newer USB 3.0 simply can’t match up to the performance capabilities of Thunderbolt connectivity. That’s where Western Digital’s latest addition to the My Passport lineup comes in; the My Passport Pro.

Designed with creative professionals in mind, My Passport Pro’s dual-drive setup packs super-fast Thunderbolt performance — around 230 MB/s read & write speeds according to WD — in to a rugged aluminium enclosure. 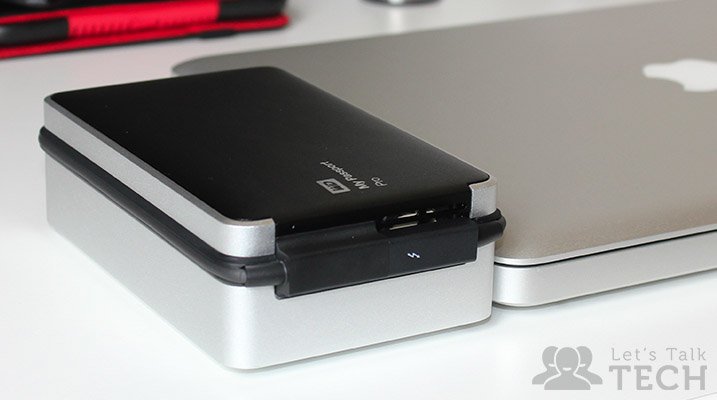 Go with the larger 4TB version and you’ll be getting an anodised all-aluminium enclosure measuring over 5.5 inches long, 3.5 inches wide and around 1.7 inches tall. Those dimensions already make My Passport Pro a substantial piece of kit to carry around, but it’s the 0.72 kg weight that sets it apart from the average portable hard drive.

This isn’t a device you can easily slip in to a bag without a second thought — when you’re carrying it around with you, you’ll know it.

The alternative 2TB My Passport Pro is far more portable and travel friendly, measuring up at 1.1 inch shorter and weighing a more reasonable 0.46 kg. For anybody who favours traveling light over storage capacity, that smaller model is likely to be the favourite pick of the two. 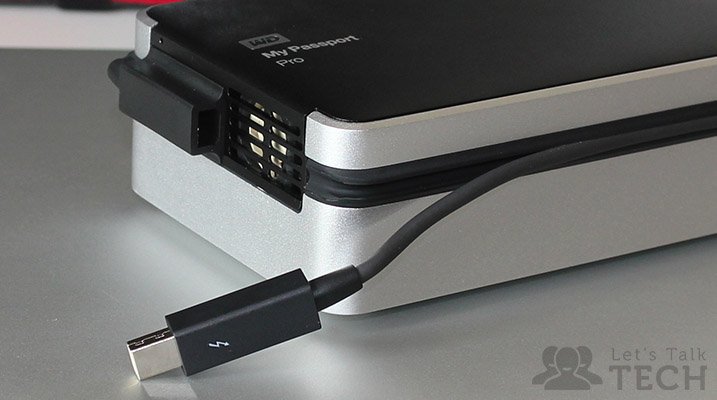 Thunderbolt cable is attached to the drive.

Hard drives don’t generally tend to excel in the design department, but My Passport Pro’s attached Thunderbolt cable with its clever ‘tuck-in’ design is impressive. It just means that you don’t need to carry around a loose (and expensive) Thunderbolt cable, and because of the female connector near the drive’s internal fan, you’re less likely to damage the connector tip, too.

Even more convenient is the fact that My Passport Pro is bus-powered, meaning it doesn’t need any additional power cables to run. Simply plug the Thunderbolt cable in to your Mac and that’s it. 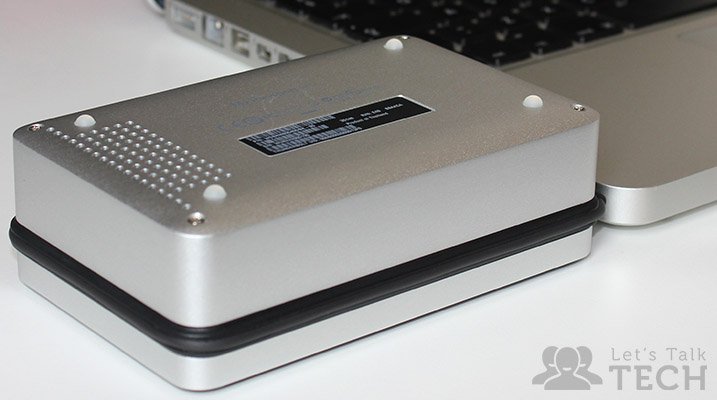 The underside of the drive also has a few drilled holes for extra ventilation and four rubber feet to keep it stable on a flat surface.

Western Digital ship the My Passport Pro ready to plug’n’play and formatted in a RAID 0 configuration — the preferred option for those wanting to get the best possible performance and use the full 4TB capacity. This configuration won’t provide you with any backups though, so you will need to arrange alternative backups to the cloud, use a NAS drive like WD’s My Cloud, or simply another external drive.

Using the included WD Drive Utilities software however, you can very easily reformat the drive in to a RAID 1 configuration instead, allowing you to mirror/back up the content from one of the internal 2GB drives to the other.

As you’d expect from a product made for Mac, the My Passport Pro is also Time Machine compatible, so storing backups directly on to it won’t be a problem either. 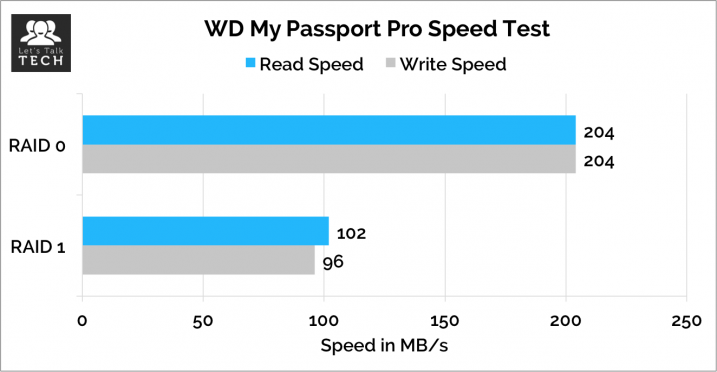 Switch over to a RAID 1 configuration instead and you’ll be compromising heavily on performance, with the My Passport Pro’s read/write speeds being comparable to a slower USB 3.0 drive at 102 MB/s & 96 MB/s, respectively. You may benefit from the safety of a mirrored backup, but the performance implications almost nullify the perks of using a Thunderbolt drive.

In actual usage the drive remained relatively quiet throughout usage. The internal fan can be heard in a quiet room but it’s a very feint humming sound, so it’s hardly a bother.

Taking in to account the rugged build quality, sleek aluminium design and of course the rapid performance, WD’s My Passport Pro is a fantastic solution for creative professionals or users that work with large media files.

It may be larger and heavier than conventional portable hard drives, but those are two small compromises to make in exchange for the performance benefits and top quality design.