“This is the tablet than can replace your laptop” — that was the key message that Panos Panay, Corporate VP at Microsoft, wanted to deliver at Microsoft’s Surface event in New York, earlier today.

Microsoft have essentially produced the 12″ Surface 3 to remove the need to own a tablet alongside a laptop, a common occurrence based on their stats that highlight 96% of iPad owners own a laptop, too. With this larger, higher resolution display, the Surface 3 attempts to place itself in a stronger position that its predecessors to be the all-in-one replacement for both devices.

2014 seems to be the year for 12″ tablet displays if the rumour mill is anything to go by, and although Apple has been rumoured to be working on an “iPad Pro”, Microsoft’s Surface Pro 3 beat them to it with an exact 12″ diagonal display, also featuring an impressive resolution of 2160 x 1400.

Despite Apple still having the edge in terms of resolution with the iPad Air, 2160 x 1400 is definitely a huge improvement over the 1080p display previously on the Surface Pro 2.

To be able to power such a beautiful screen and allow users to easily work on tasks like RAW image and video editing, Microsoft had to use an i7 processor for the top model, although there are also i5 and i3 versions available.

Microsoft continued the Surface’s familiar design and landscape orientation, with the Windows logo now placed on the right of the device — a similar position to the iPad’s home button.

They also made changes to the kickstand; there is now a new multi-position hinge rather than a couple of pre-set angles, making it more versatile for different usage scenarios.

To further compliment the device’s power, Microsoft have also managed to get the Pro 3 down to 9.1mm thick and 800g in weight. Whilst this is thinner and lighter than the older model, Microsoft was only able to compare the Surface Pro 3 to a 13″ Macbook Air, as it’s still thicker and heavier than most other flagship tablets on the market.

One of the most successful accessories for the Surface range is the Type Cover, since it improves the typing experience and productivity. Microsoft announced a brand new Type Cover which has a 68% larger touchpad, as well as a brand new magnetic hinge which allows for a better lap position. 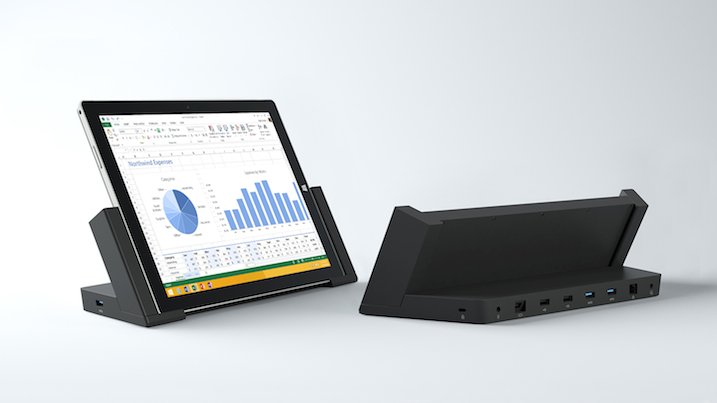 Surface Pro 3 in the new dock

There is currently no news about UK pricing.