The Good: A powerful and versatile plain text editor with a host of export options.

The Bad: Some font choices produce odd results and I would’ve liked to see support for actions and x-callback-url too.

The Bottom Line: If you work with text, then Ulysses for iPad is among the best tools to help you get the job done on iOS.

After what seemed like an eternity of teasing, The Soulmen finally released Ulysses for iPad (along with an updated Ulysses for Mac). Having used it for a couple of weeks now, I can easily condense it into a single word my overall impression: Impressed. Like, a lot!

Although The Soulmen state in the app’s introduction that many features present in Ulysses for Mac are not yet available in the iOS counterpart, I’d argue that those which are present, rival most desktop class editors. 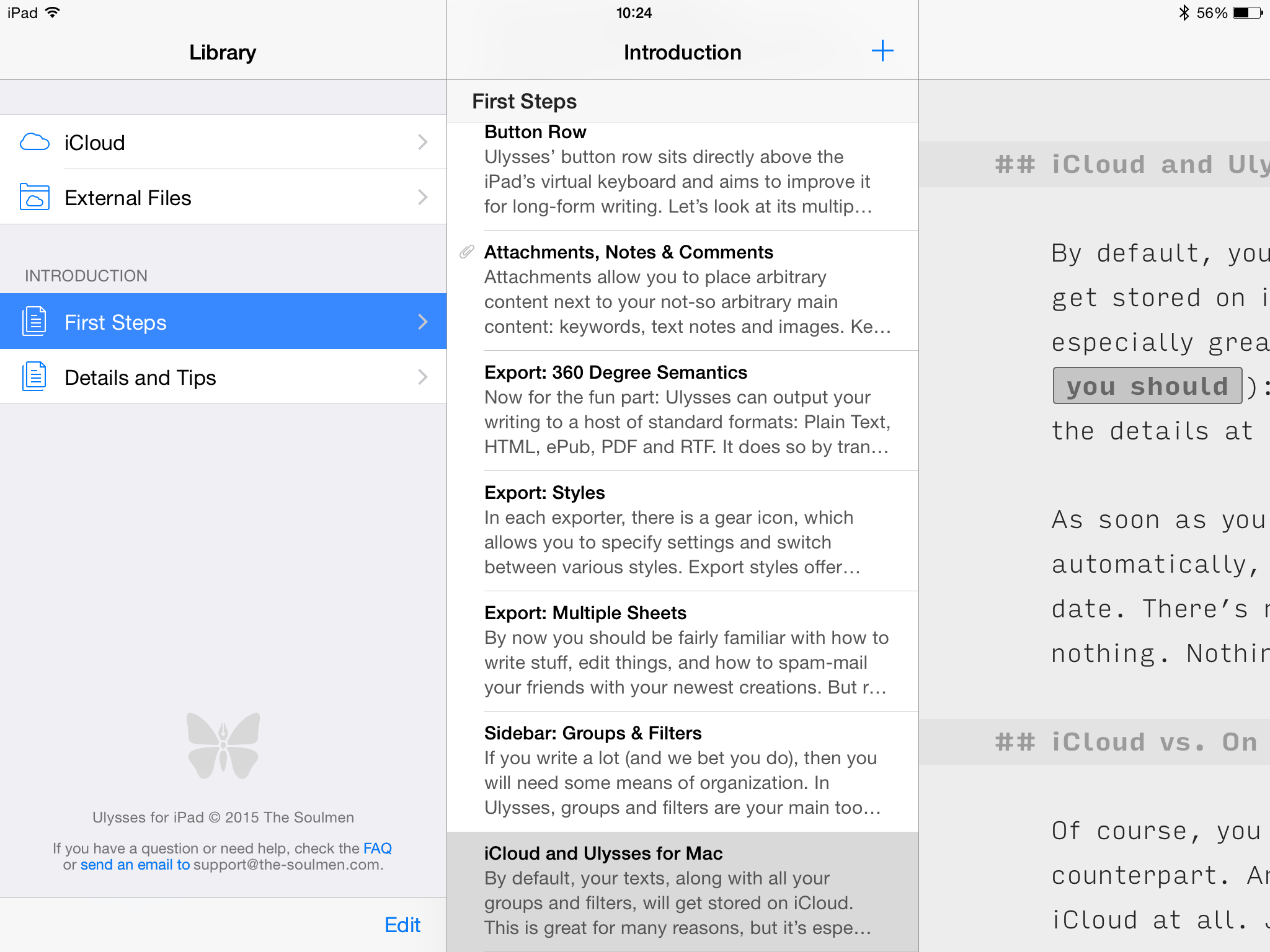 The same three paned interface present in Ulysses for Mac.

If you’re familiar with Ulysses for Mac, then you’ll feel right at home since Ulysses for iPad sports the same three paned interface. Folders and filters in the first (left-most) pane, documents (or sheets as they’re referred to) in the second pane and finally, the sheet being edited in the third.

Ulysses allows you to tailor it to best suit your personal taste. Although new styles can only be created on a Mac, many can be downloaded and installed from the Style Exchange (and for the night owls, each theme has a dark variant too). The developers didn’t stop there though and also added the ability to install new fonts, letting you create a truly cohesive yet personal environment conducive to writing. 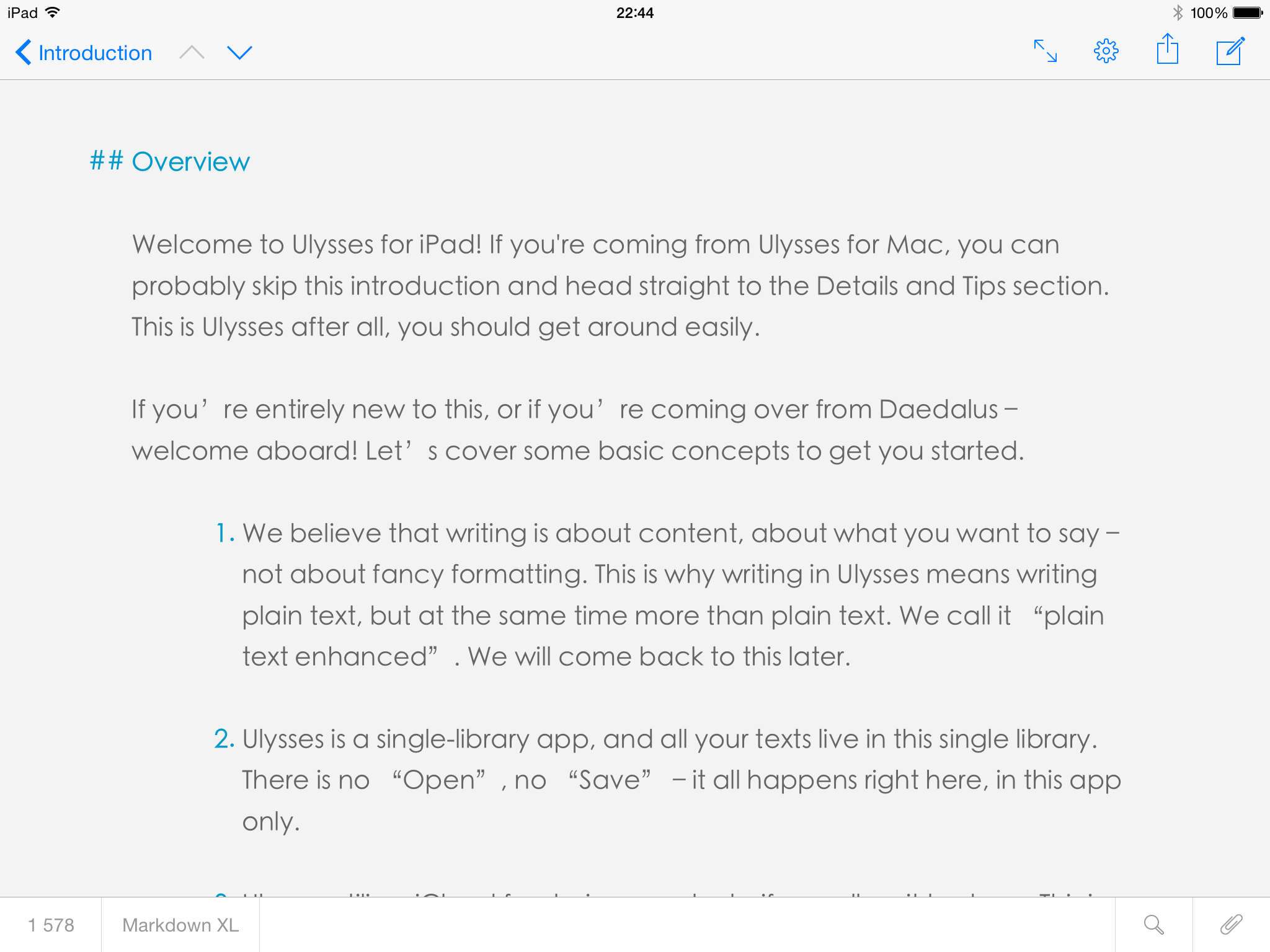 Some fonts do however produce odd results. Notice the extra space before and after characters like ” or ‘

Ulysses supports Textile, Minimark, Markdown, and Markdown XL syntaxes. While Markdown purists may take umbrage with the syntax, if you embrace Ulysses on both platforms, then there are clear benefits to adopting Markdown XL, such as the ability to embed video, footnotes and annotations. 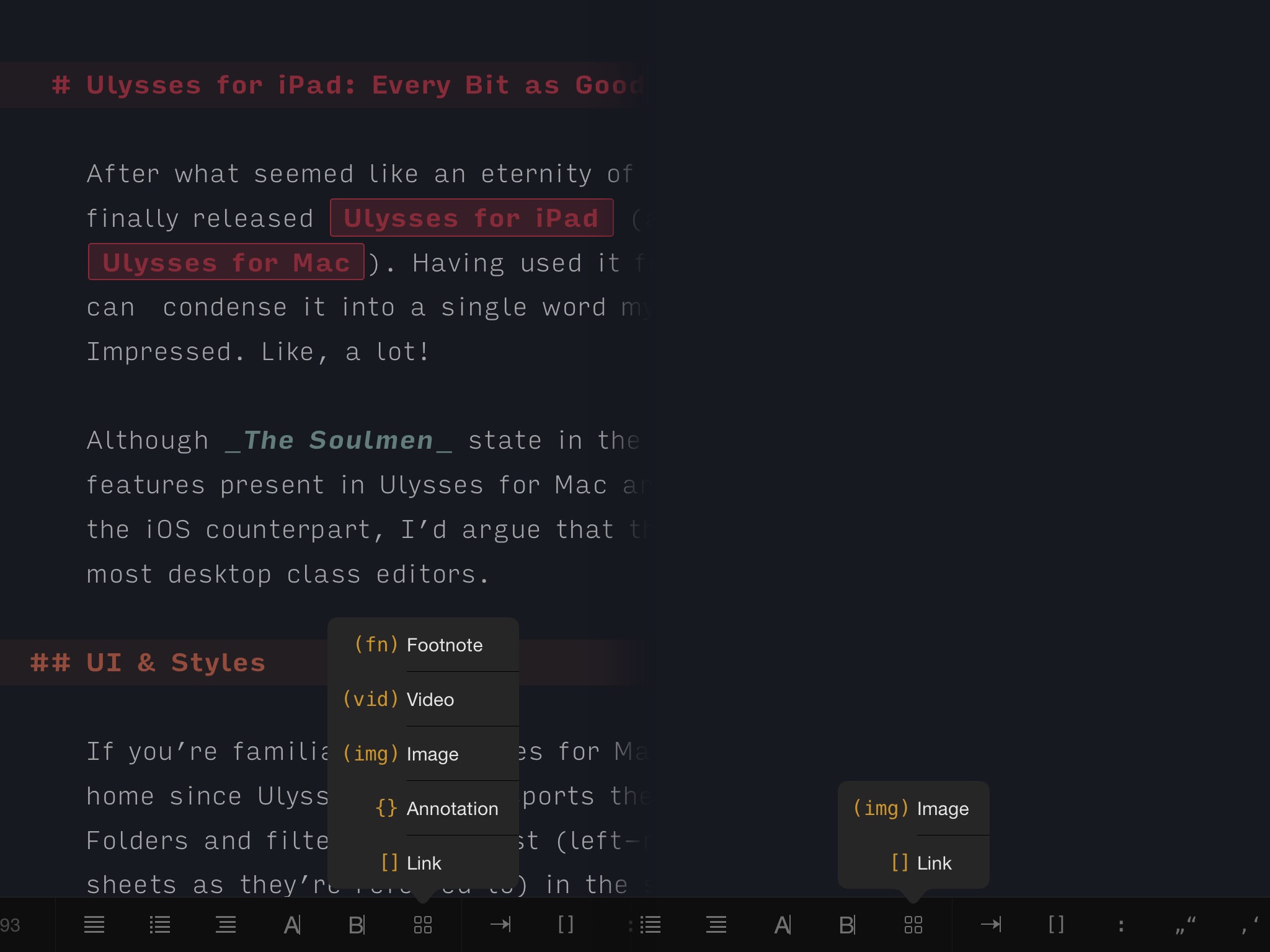 Markdown XL on the left vs Plain Markdown on the right. Notice how many more options are available.

Ulysses for iPad paired with an external keyboard is a match made in heaven. A host of keyboard shortcuts allow you to format text (italicise, embolden, add links etc.) as well as control Ulysses’ interface, toggling panels, export, dark mode and more.

This is not to say that Ulysses is handicapped without an external keyboard; quite the contrary in fact. An extra button row (also visible when using an external keyboard) provides a multitude of convenient shortcuts for formatting text, adding lists, links and images to name but a few.

This row is also where you’ll find various text statistics such as character and word counts, number of sentences, lines and even estimated reading time. All these can easily be customised to show what you need most. Finally, the button row is where you can access search (limited to the current sheet for now) and attachments. 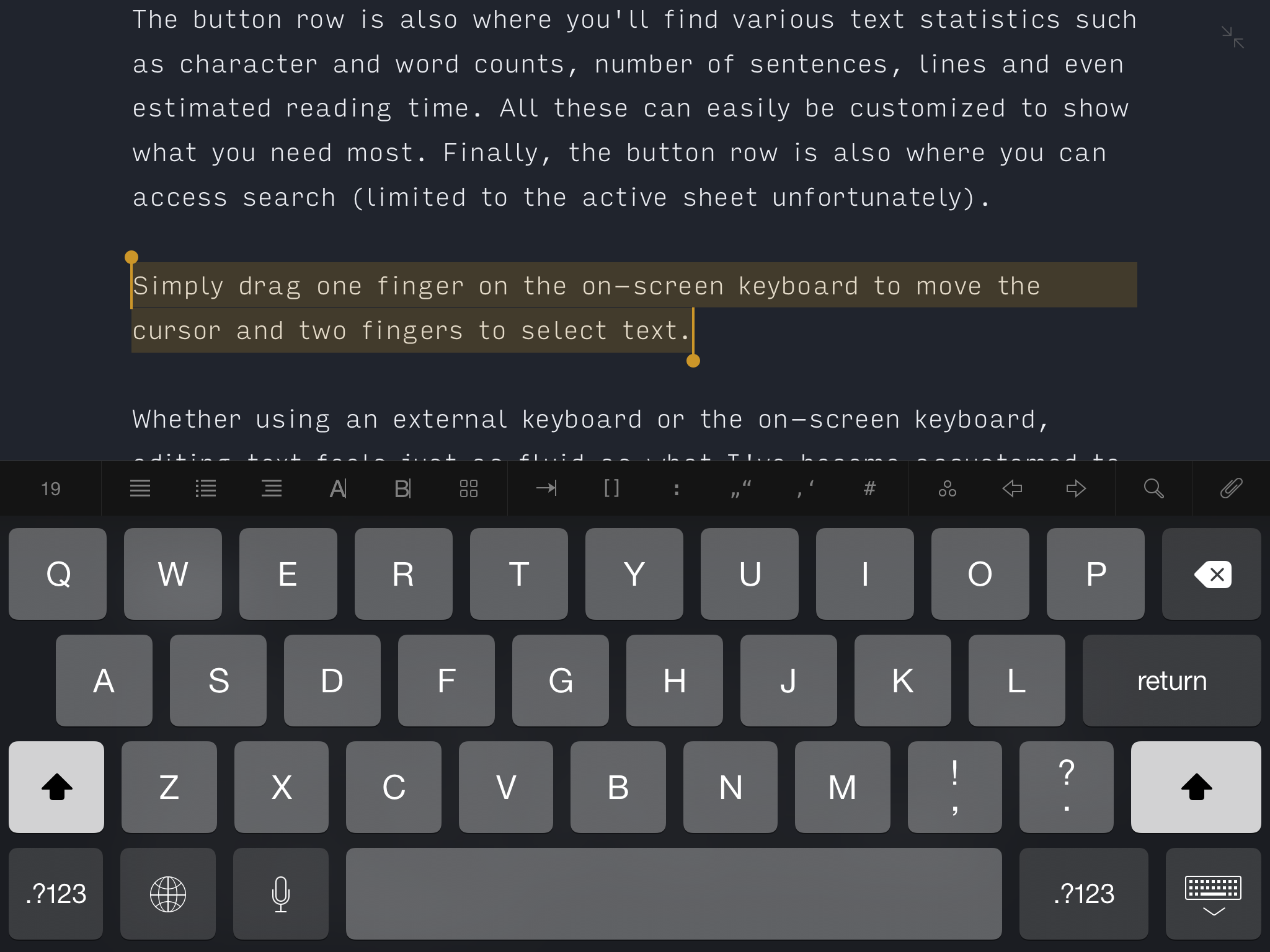 Simply drag one finger on the on-screen keyboard to move the cursor and two fingers to select text.

Whether using an external keyboard or the on-screen keyboard, editing text feels just as fluid as what I’ve become accustomed to on Ulysses for Mac.

Provided you aren’t usually plagued with iCloud issues, sync works remarkably well. Text edited on the iPad quickly made it’s way onto the Mac and vice-versa. But text isn’t the only thing that syncs between Ulysses for iPad and Ulysses for Mac.

As I alluded to earlier, each sheet can have attachments in the form of notes, images or keywords. These, as well as groups and filters sync between Mac and iPad too.

Of course, Ulysses for iPad is a true iOS 8 citizen. The integrated document picker means that you can easily import text from any app that supports it and handoff allows you to seamlessly switch between Mac and iPad. 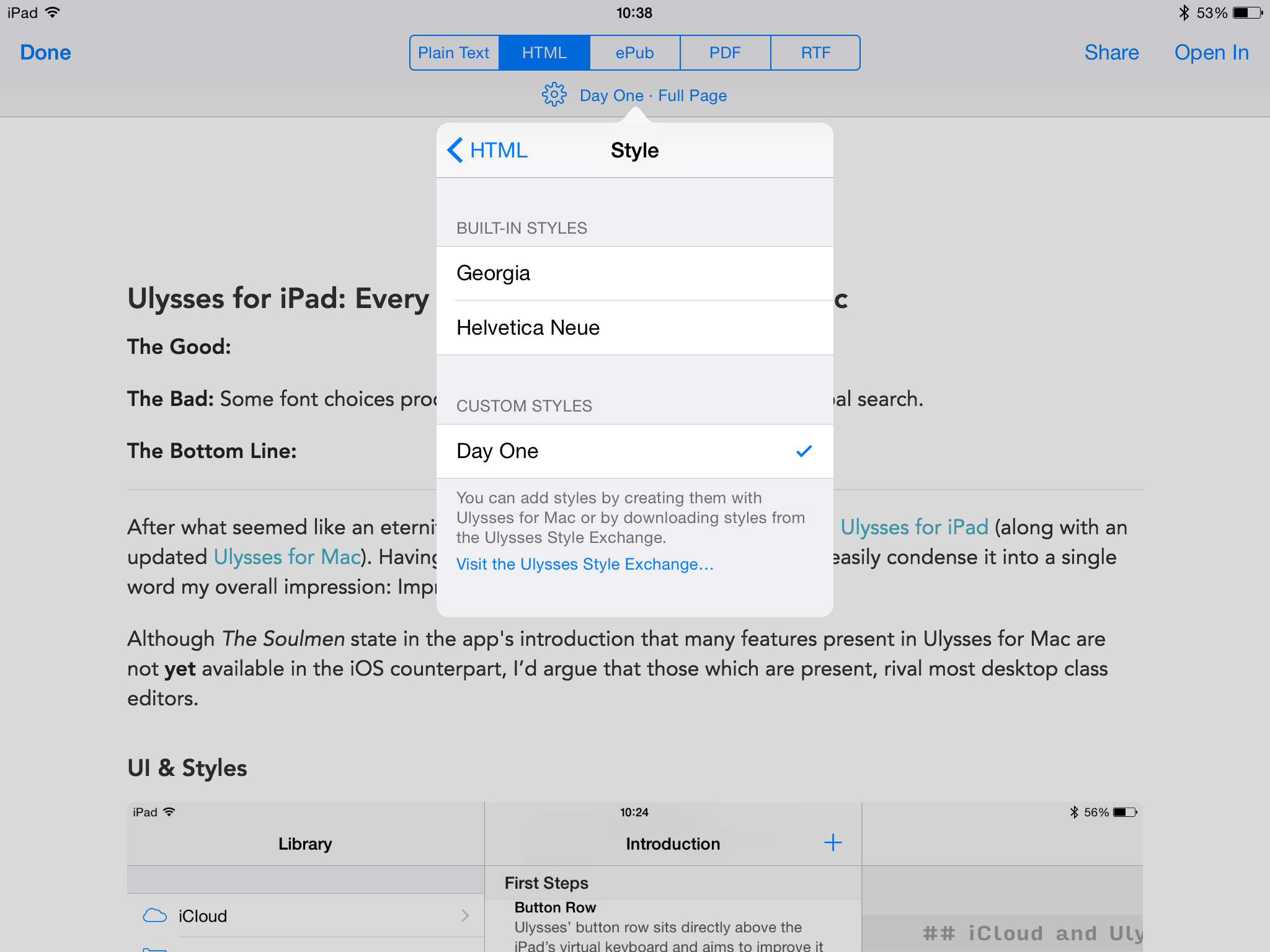 A host of export options. Custom styles can be downloaded from the Style Exchange.

An area where Ulysses for iPad excels is export. The host of options is impressive, making it easy to forget you’re working on an iPad. The list of formats includes Plain Text (plain text, Markdown and TextBundle), HTML, ePub, PDF and Rich Text (Text Edit and Word), each with further customisation options and also the ability to download custom styles from the Style Exchange.

While using Ulysses for iPad, there was really only one thing that I felt lacking–support for x-callback-url and actions. Granted this isn’t something everybody will use, but I did miss being able to select a word and quickly jump into Terminology, or lookup the app price and affiliate link. These were however minor annoyances that ultimately didn’t detract from the pleasure of using Ulysses.

In all fairness, there were a few others (such as global search) but these are planned to be fixed in future updates, so they’re not major issues.

Whether it’s your next best selling novel bound to be turned into a blockbuster movie, your personal blog posts or even incoherent ramblings, if you work with text, then Ulysses for iPad is among the best tools to help you get the job done on iOS.

Few editors are as feature filled and polished as Ulysses for iPad, fewer still on iOS. Priced at $19.99 it may not be cheap, but then again, good things seldom are.